One More Go Round With Mr. Vonnegut 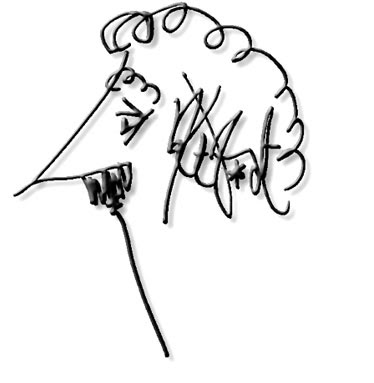 Kurt Vonnegut was an inveterate doodler and often signed his transcripts, speeches and autographs with this image.

The outpouring of affection following the novelist's death on Wednesday has been extraordinary, and as Pete Abel notes:

"What's truly amazing is that such a disparate range of individuals -- from the left, right, and middle of the political spectrum – could all have essentially the same heart-rending reaction to the news of Vonnegut's passing.

"Perhaps that should count among his greatest accomplishments: While we all knew or assumed what his politics were, we didn't care. He stubbornly transcended politics, reminding us to think as we should think: not about systems and structures and processes, but about people; individuals both like and unlike us, doing their damnedest to slug on from day to day, desperately pushing off the bad and bear-hugging the good."

And this reminder for old farts like myself by Verlyn Klinkenborg of The New York Times:

"If you read Kurt Vonnegut when you were young — read all there was of him, book after book as fast as you could the way so many of us did — you probably set him aside long ago. That’s the way it goes with writers we love when we’re young. It’s almost as though their books absorbed some part of our DNA while we were reading them, and rereading them means revisiting a version of ourselves we may no longer remember or trust. . . .

"So you get older, and it’s been 20 or 30 years since you last read Player Piano or Cat’s Cradle or Slaughterhouse-Five. Vonnegut is not, now, somehow serious enough. You’ve entered that time of life when every hard truth has to be qualified by the sense of what you stand to lose. 'It’s not that simple,' you find yourself saying a lot, and the train of thought that unfolds in your mind as you speak those words reeks of desperation.

"And yet, somehow, the world seems more and more to have been written by Vonnegut and your life is now the footnote. Perhaps it is time to go back and revisit that earlier self, the one who seemed, for a while, so interwoven in the pages of those old paperbacks."

Funeral arrangements were pending as of Friday morning. Contributions in Vonnegut's memory may be made to the Turtle Bay Association, an historic preservation group on Manhattan's East Side.