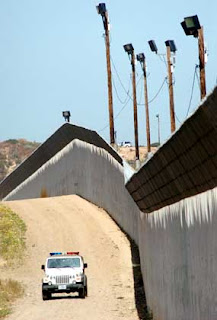 President Bush went to the Mexico border in Arizona on Monday and showed once again that immigration is an issue he understands. He said America suffers from a system that exploits people who come to do jobs that citizens won’t do. He said the country needed "a practical answer" that promotes an orderly flow of legal immigrants, eases pressure at the border and opens a path to citizenship for the hidden 12 million who keep our economy humming. And he urged Congress to find that answer through a "serious, civil and conclusive debate."

It was good that Mr. Bush made these points, as he periodically does. But there was a dissonance in his speech, because it came only two weeks after he and a group of Senate Republicans circulated a list of "first principles" about immigration that amounted to a huge step backward for efforts to fix a broken system in a reasonable, humane way.

It proposed new conditions on immigrant labor so punitive and extreme that they amounted to a radical rethinking of immigration — not as an expression of the nation’s ideals and an integral source of its vitality and character, but as a strictly contractual phenomenon designed to extract cheap labor from an unwelcome underclass.

-- THE NEW YORK TIMES
The evidence against the Duke lacrosse boys was so lacking that the North Carolina Attorney General is proposing a new law to help keep this from happening again.


The White House wants to appoint a high-powered czar to oversee the wars in Iraq and Afghanistan with authority to issue directions to the Pentagon, the State Department and other agencies, but it has had trouble finding anyone able and willing to take the job . . .

At least three retired four-star generals approached by the White House in recent weeks have declined to be considered for the position, underscoring the administration's difficulty in enlisting its top recruits to join the team after five years of warfare that have taxed the United States and its military.

Is there any tag team capable of doing more damage to the truth than over-eager warbloggers enlisting with gossip guru Matt Drudge? The two factually challenged camps joined forces last week in an effort to slime CNN's Iraq reporter Michael Ware by spreading the bogus story that he'd heckled Sen. John McCain during a Baghdad press conference. It actually took less than one day for the malicious falsehood to be debunked. And in the end, Drudge and the warbloggers -- those bitter, pro-war, dead-enders -- simply made April fools of themselves for peddling the concocted tale.

-- ERIC BOEHLERT
A federal panel responsible for conducting election research played down the findings of experts who concluded last year that there was little voter fraud around the nation . . . Instead, the panel, the Election Assistance Commission, issued a report that said the pervasiveness of fraud was open to debate.

The revised version echoes complaints made by Republican politicians, who have long suggested that voter fraud is widespread and justifies the voter identification laws that have been passed in at least two dozen states.

We are now being invited to ponder the question of whether Hillary really tried to enlist in the armed forces, as she has maintained.

It's an odd little episode, and I have no reason whatsoever to think that the senator is making it up. But there are enough people who don't believe anything she says that I doubt we've heard the last of this one.

I think in order to avoid mistakes like this in the future, it might be helpful if blacks, women, gays (whoops! I almost wrote "faggots" by mistake!) and other oppressed groups compiled a list of offensive terms that are no longer funny. They might also want to set up a website that could be updated with new terms as they are added to the list, which pundits, comedians and shock jocks could check to make sure they aren’t saying anything that will get them fired or cause them to lose lucrative commercial endorsements. I know I would be able to breathe a lot easier if I knew what demeaning stereotypes and insults I could and could not use.

The Bush administration doesn't quite realize it yet, but the president and vice-president will, in the future, become moral pariahs to a lot of people. Not pariah in the sense of Clinton, whose sexual addiction evokes both pity and anger that he kept lying about it. And not pariah in the sense of Nixon, who committed a crime against his opponents, his office and the constitution. What the revulsion of Brigham Young students - yes, Brigham Young students - suggests is that for many of the next generation of natural Republican supporters, Bush and Cheney are moral pariahs.

Katie Couric's ascension to Dan Rather's seat promised a change in mood, if not an improvement in substance over the man who continues to insist that the Bill Burkett memos were genuine. It turns out that Couric also produces memos and articles that lack genuineness, as a plagiarism scandal exposed her as ghost-written on her own "notebook."

Vindicated once again. As anyone who knows me can tell you, I love to be right. Especially when it takes years to be proven so. Dieting is not good for you, but a change of lifestyle is. L has lost 100 pounds since Labor Day and while he still has another 70 or so pounds to go, he is no longer part of one of the fastest growing segments of society. He is not dieting. He changed his approach to food, added vegetables and fruit on a regular basis, still has bacon for breakfast, chips for a snack (Trader Joes Chinese Mustard Wonton chips), and gets regular exercise by walking. Instead of being ignored and dismissed as useless at work, he is now a preferred worker because of his increased stamina and positive attitude. He thanks me at least once a week for showing him how to change his life. Right on, it's always nice to be appreciated. Especially for a good cause.