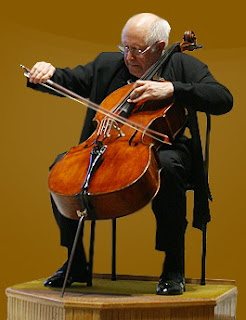 Mstislav Rostropovich, a cellist and conductor who was renowned not only as one of the great instrumentalists of the 20th century, but also as an outspoken champion of artistic freedom in Russia during the final decades of the Cold War, died today in Moscow. He was 80.


As Soviet rule collapsed, the cellist was at the barricades among those who defended the government headquarters alongside 's first President Boris Yeltsin in during the abortive putsch staged by Communist party hardliners in 1991.

"Perhaps because his repertory was so broad, he was able to make his cello sing in an extraordinarily range of musical accents. . . . As a conductor, Mr. Rostropovich was an individualist. He happily molded tempos, phrase shapes and instrumental balances to suit an interpretive vision that was distinctly his own, and if his work did suit all tastes, it was widely agreed that the passion he brought to the podium yielded performances that were often as compelling as they were unconventional. He was at his most eloquent — and also his most freewheeling — in Russian music, particularly in the symphonies of Tchaikovsky, Prokofiev and Shostakovich."

A great loss. Just a year ago I had the fortune of hearing the San Francisco Symphony play Khachaturian's Violin Concerto with Rostropovich conducting. It was wonderful.

He will be missed.

I'm attending a concenrt-lecture with Leon Botstein and the American Symphony Orchestra next Sunday in NYC and plan to asked him for his take on Rostropovich.