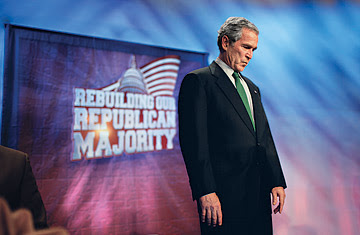 Time magazine's Joe Klein is one of the most influential political commentators out there, which makes his pronouncement that George Bush is unfit to govern a rather large -- if belated -- development.

Writes Klein in a commentary titled An Administration's Epic Collapse:

"The three big Bush stories of 2007 -- the decision to 'surge' in Iraq, the scandalous treatment of wounded veterans at the Walter Reed Army Medical Center and the firing of eight U.S. Attorneys for tawdry political reasons -- precisely illuminate the three qualities that make this Administration one of the worst in American history: arrogance (the surge), incompetence (Walter Reed) and cynicism (the U.S. Attorneys). "When Bush came to office -- installed by the Supreme Court after receiving fewer votes than Al Gore -- I speculated that the new President would have to govern in a bipartisan manner to be successful. He chose the opposite path, and his hyper-partisanship has proved to be a travesty of governance and a comprehensive failure. I've tried to be respectful of the man and the office, but the three defining sins of the Bush Administration -- arrogance, incompetence, cynicism -- are congenital: they're part of his personality. They're not likely to change. And it is increasingly difficult to imagine yet another two years of slow bleed with a leader so clearly unfit to lead."

Photograph by Brooks Kraft/Corbis
Posted by Shaun Mullen at 5:00 AM
Email ThisBlogThis!Share to TwitterShare to FacebookShare to Pinterest

Klein writes: "they're part of his personality."

They're part of his disease, which is alcoholism. Bush is a dry drunk and, as anyone who knows anything at all about this insidious disease will tell you, removing the symptom (substance abuse) doesn't address the disease (alcoholism).

Babs and Papa George called the wrong Bill when they had their chance -- Billy G., not Bill W. This was the seminal moment in our current national tragedy.

Take Off the Gloves
The pig headed thinking that sends Sam Fox, the Swift Boat Veterans for Truth Bushie loyalist to Brussels by a recess appointment is from the same mind set group that 'rules' the earth's most powerful country. It's a mind set that simply doesn't acknowledge that there are rules.
It is sad and sad and scary.
To my mind, if a person sucker punches his enemy over and over again, that person should not be surprised when his antagonist goes Marcus of Queensbury on him and just drops him flat.
Truly, Bush needs to be removed from office; the judicial method matters not a wit.