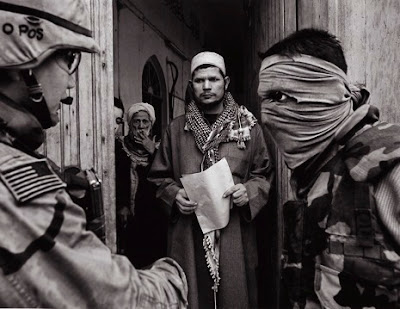 Whenever I asked Iraqis what kind of government they had wanted to replace Saddam's regime, I got the same answer: they had never given it any thought. They just assumed that the Americans would bring the right people, and the country would blossom with freedom, prosperity, consumer goods, travel opportunities. In this, they mirrored the wishful thinking of American officials and neoconservative intellectuals who failed to plan for trouble. Almost no Iraqi claimed to have anticipated videos of beheadings, or Moqtada al-Sadr, or the terrifying question "Are you Sunni or Shia?" Least of all did they imagine that America would make so many mistakes, and persist in those mistakes to the point that even fair-minded Iraqis wondered about ulterior motives. In retrospect, the blind faith that many Iraqis displayed in themselves and in America seems naïve. But, now that Iraq’s demise is increasingly regarded as foreordained, it's worth recalling the optimism among Iraqis four years ago.
-- GEORGE PACKER
President Bush on Tuesday invited Democrats to discuss their standoff over a war-spending bill, but he made clear he would not change his position opposing troop withdrawals. The White House bluntly said the meeting would not be a negotiation.

-- DEB RIECHMANN
Having a bedroom of my own is quite a blessing and having it on the top floor of the house is a super kind of a blessing. I am free to make my bed or make it look like a nuclear wasteland, dust the dresser or do it some other time – which could stretch to a week - since my mum is not so keen on climbing the stairs to check how girly the room looks like the good ol' days. . . .

Unfortunately, my room has disadvantages too. The architect who designed the house some 40 plus years ago gave me unnecessarily large windows overlooking the street, which has reduced it to a watchtower in times of crises. Of all other rooms, it has been hit by the largest number of shrapnel, which has forced me to forget about aesthetics and watch the spellbinding sunset through ugly X-duct-taped panes.

Broderesque columnists loudly wail about the fact that both sides are unwilling to sit down over tea and negotiate and compromise.

Republicans sneak in with what they call a "compromise" which, magically, will be exactly what Bush wants, and won't involve actually compromising with the people who run Congress.

Broderesque columnists will loudly praise the non-compromise compromise put forward by the Republican party and the Bush administration.

We've been here many times before.

-- ATRIOS
It's no secret that the period of time between 9/11 and the invasion of represents one of the greatest collapses in the history of the American media. Every branch of the media failed, from daily newspapers, magazines and Web sites to television networks, cable channels and radio. . . .

Bush administration lies and distortions went unchallenged, or were actively promoted. Fundamental and problematic assumptions about terrorism and the "war on terror" were rarely debated or even discussed. Vital historical context was almost never provided. And it wasn't just a failure of analysis. With some honorable exceptions, good old-fashioned reporting was also absent.

The question I'd ask is: why would the American press corps in Washington cover the Bush administration properly for its first five years? Given the institutional forces involved, there are many, powerful reasons they wouldn't, and a few, weak reasons they would. Thus the fact they didn't (and are still generally doing a horrible job) is no surprise to me. On the contrary, I would have been extremely surprised if they had.

-- JONATHAN SCHWARZ
It is hardly surprising, given the right's dyspeptic mood at the moment, that one of the most popular campaign slogans in Republican circles is aggressively negative: the words Rudy McRomney, with a red line through them. Rudy Giuliani is a social liberal with a colourful past who wants his wife to attend cabinet meetings, John McCain is a septuagenarian rebel and Mitt Romney is an all too smooth flip-flopper. Almost 60% of Republicans tell pollsters that they are not satisfied with their party's candidates.

-- LEXINGTON
Democrats have once again gone running in fright from Fox News Channel for a political debate -- or more accurately, have run from fear of their anti-war base. Hillary Clinton and Barack Obama join John Edwards in refusing to appear on Fox for a debate sponsored by the Congressional Black Caucus.


-- CAPTAIN ED MORRISSEY
The fact remains that ordinary politics -- leaking, sniping, lying, cheating, exaggerating and other forms of PG entertainment -- have been so thoroughly criminalized that only a fool would appear before Congress without attempting to bargain for immunity by first invoking the Fifth Amendment. After all, it is a permissible exaggeration to say that in recent years more senior federal officials have had sit-downs with prosecutors than have members of the Gambino family.

-- RICHARD COHEN
It took just two blubbering sailors spilling their guts before the Government realised its nifty PR strategy to hide the ignominy of what happened to the Tehran 15 had backfired badly. Now the original ban on getting paid for newspaper stories has been restored.

Bit late now, eh? The two sailors, about as much use in a combat situation as chocolate teapots, have got their dosh. They have cheerfully detailed their craven wimpiness. And the Iranians have released more video footage for the world to laugh at. What a fiasco.

When Ellen Barkin called into Bravo's live online show "Watch What Happens," host Andy Cohen asked Barkin whether she "did it" with George Clooney on the set of "Ocean's 13." "Have you done it with George Clooney?" she asked back. Cohen then told her, "I'd like to quiz you on everyone you've ever done it with," to which Barkin responded, "I know you would. But you don't have enough time." The conversation eventually cooled off and focused on Barkin's favorite piece of furniture - her $60,000 leather coffee table.