Meanwhile, Out in Diyala Province 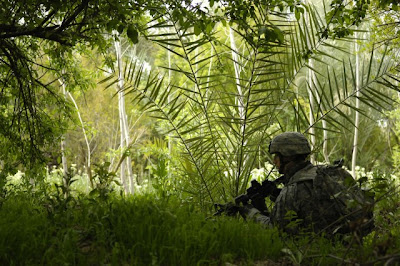 A U.S. soldier beats the bush in Buhriz, Diyala Province
The mainstream media has tended to obsess on how the war is going in Baghdad while giving short shrift to the rest of Iraq except for coverage of suicide bombings and other forms of carnage.

But most U.S. troops are deployed outside the capital, including Diyala Province where they have been engaged in a methodical campaign to flush out Al Qaeda insurgents.

Bill Roggio over at the Fourth Rail offers an account of nitty-gritty aspects of the operation.

"Citizens in Diyala are asking the Iraqi government to fight Al Qaeda and prevent the province from 'turning Diyala cities [into the next] Taliban emirate,' notes Al Saabah. "Citizens said that the situation in the cities of Baqubah, Muqdadyia, Khalis and Bald Ruz are turning into a major humanity disaster, especially after Al Qaeda issued a list of all forbidden activities including working at governmental offices, ownership of satellite and Internet sets, as well as the destruction of mobile phone towers.

"We have noted for some time the Diyala Salvation Council will be formed shortly, and all signs point to this development. The U.S. military is ahead of the game in Diyala, and learned a valuable lesson from Marine operations in Anbar province."

Photograph by Air Force Staff Sergeant Stacy L. Pearsall
Posted by Shaun Mullen at 12:57 AM
Email ThisBlogThis!Share to TwitterShare to FacebookShare to Pinterest