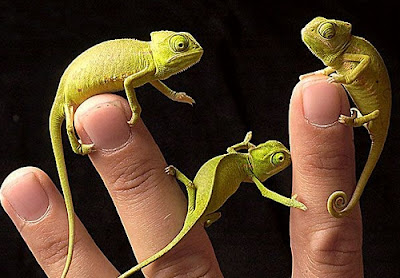 Baby chameleons by Jan From Essex. More of her photos here.
When the heads of state of the Southern African Development Community convened last week in Dar es Salaam, Tanzania, to discuss the political situation in Zimbabwe, hopes among the Zimbabwean people ran high. President Robert Mugabe had recently extended his brutal efforts to crush dissent from his political opponents to include ordinary Zimbabweans. His ruling party left a trail of fractured bodies and two dead in its most recent crackdown. . . .


At the summit, however, the African leaders showed their indifference to the suffering that we ordinary people of Zimbabwe continue to endure. At the closing news conference, Tanzanian President Jakaya Kikwete announced that he and his fellow heads of state were "in support of the government and people of Zimbabwe."

"We got full backing; not even one [SADC leader] criticized our actions," Mugabe boasted after the summit.


Here's what the Bush administration has done to the values, traditions and honor of the United States of America: An accused terrorist claims he confessed to heinous crimes so that agents of the U.S. government would stop torturing him, and no one is shocked or even surprised. There's reason to believe, in fact, that what the suspect says about torture is probably true.

There's also reason to doubt that the suspect -- Abd al-Rahim al-Nashiri, held in U.S. custody without charges for more than four years -- is the Zelig-like innocent bystander he claims to be. But we can't be sure, because George W. Bush disgraced himself and his country by ordering extrajudicial kidnappings of suspects in the war on terror, indefinite secret detention and interrogation by "alternative" methods that the civilized world calls torture.

Let's see if all the big news outlets who lavished so much coverage on the White House's attack on Nancy Pelosi for her trip to Syria have any time for this:

It's well known by now that even as the White House was slamming Pelosi for her Syria trip GOP House members were making their own trip to Syria. This has drawn lots of attention already.

But check this out: It now looks like the White House might have actually been helping these House Republicans arrange their trip to Syria at the same time they were criticizing Pelosi for going there! Who's the source of this allegation? The chief of staff to one of the GOP Congressmen who went to Syria, that's who!

So let me get this straight. Bush remonstrates dastardly Nancy for her passage through Damascus, at the very time the Israelis are reportedly using her to pass a message to Bashar Assad to help avoid a possible conflagration with the Syrians. Soon, Bush will be telling Bibi Netanyahu or Avigdor Lieberman they're wimps, and to hang Crawford tough against the 'Palis' or such.

A secret FBI intelligence unit helped detain a group of war protesters in a downtown Washington parking garage in April 2002 and interrogated some of them on videotape about their political and religious beliefs, newly uncovered documents and interviews show.

For years, law enforcement authorities suggested it never happened. The FBI and D.C. police said they had no records of such an incident. And police told a federal court that no FBI agents were present when officers arrested more than 20 protesters that afternoon for trespassing; police viewed them as suspicious for milling around the parking garage entrance.

The news that the three top Democrats have outraised the three top Republicans by a total of $15 million is very significant. It indicates that those inclined to give to Democrats are opening their wallets bigtime while Republican donors are profoundly wary. It's an indication of an intensity gap between committed Dems and committed Republicans. This can change — after all, these are only numbers for the first quarter of 2006. An exciting race on the GOP side could cause a lot of money to shake free in the fall and winter, when it will be most needed. But this is yet another data point to suggest there has been a GOP meltdown since 2004 and only a really vibrant GOP campaign leading to a very formidable and stimulating nominee can turn things around.

Walmart now loves Democrats. It isn't exactly news that deep pocket corporate contributions aren't based on ideology. They traditionally hedge their bets and spend the money according to who is in power and as such serve as something of a barometer on the conventional wisdom over who's hot and who's not. But it does serve as a reminder that any politician can be bought. Payola is non-partisan and so unfortunately is political backscratching. I think it's another good argument for mandating public financing for campaigns.

Readers know I'm a global warming pessimist, almost completely convinced that we'll never muster the political will nor global unity to meaningfully curb carbon emissions in time to head off the ravages of climate change, if for no other reason than global warming will harm the developing world first and most, and it's hard to get individuals to sacrifice when they can't feel and don't really expect consequences.

But I am a techno-optimist, so I've long assumed wacky planetary engineering fixes will end up being deployed. Algae blooms, orbiting mirrors, sulfate particles blasted into the air over the arctic -- whatever. Of course, bioengineering isn't exactly the safest route forward, so it would be nice if we gave emissions reduction the old college try first.

Darrell Roberson came home from a card game late one night to find his wife rolling around with another man in a pickup truck in the driveway.

Caught in the act with her lover, Tracy Denise Roberson -- thinking quickly, if not clearly -- cried rape, authorities say. Her husband pulled a gun and killed the other man with a shot to the head.

On Thursday, a grand jury handed up a manslaughter indictment -- against the wife, not the husband.

George W. Bush finally met a pretzel that couldn’t be Heimliched and went to Hell. The Devil, on checking his paperwork, realized that the Grim Reaper fucked up on his route and claimed the former Chief Executive’s life a bit too early. His career in public service obviously preventing his entry into heaven, Bush was instead given a choice.

The Devil took Bush on a tour of Hell and said, “George, you’ll get to pick one door out of three and whatever lies behind it will be your fate for all eternity.”