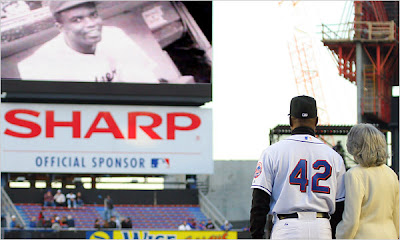 Give Jackie Robinson all due credit, but playing sports has been fool’s gold for the black community, in particular for the young people overly impressed by the glitz of occasional superstardom and duped into shooting baskets, boxing, running and hitting balls instead of studying, learning vocational skills and otherwise developing their higher selves.

Robinson’s true legacy, then, is by way of analogy, not direct emulation. The right message is not to bank on your athletic ability but to brave being the first of your group to enter the field of your dreams.

Congressional Democrats agreed Monday to ignore President Bush’s veto threat and send him a $124 billion war spending bill that orders the administration to begin pulling troops out of Iraq by Oct. 1.

Two suicide car bombers struck a small U.S. patrol base in Diyala province Monday, killing nine American soldiers and wounding 20 others. All of the casualties were members of the Army's 82nd Airborne, based in Fort Bragg, North Carolina.

Last weekend, along with Rep. Joe Sestak, I completed my fifth trip to , and I am frustrated and worried. We are still risking the lives of our troops without giving them a realistic policy worthy of their sacrifices. To me, as a veteran, that feels terribly familiar.

There are two ways to describe the confrontation between Congress and the Bush administration over funding for the surge. You can pretend that it's a normal political dispute. Or you can see it for what it really is: a hostage situation, in which a beleaguered President Bush, barricaded in the White House, is threatening dire consequences for innocent bystanders - the troops - if his demands aren't met.

The mainstream US media will sidestep this point, but [Iraq PM] Al-Maliki pretty explicitly said that the reason he called off the wall building is that he doesn't want his government compared to that of Israel. That is, the Adhamiya wall is being likened in the Arab world to the Apartheid Wall being built by the Israelis in the .

What Harry Reid said is much more disgraceful than anything Trent Lott said. And I do think Democrats should ask Harry Reid [to] step down.

In June, a case is slated to go to trial in that will mark a first step in a plan to silence press coverage of essential national security issues. The plan was hatched by Alberto Gonzales and his deputy, Paul J. McNulty—the two figures at the center of a growing scandal over the politicization of the prosecutorial process. This may in fact be the most audacious act of political prosecution yet. But so far, it has gained little attention and is poorly understood.

According to a national “pro-life” organization, governor Haley Barbour, who has pushed a series of anti-choice laws, has made his state “the safest place in for an unborn child.”

Too bad the same can’t be said for born children, as now has the highest infant mortality rate in the country.

The Food and Drug Administration has known for years about contamination problems at a peanut butter plant and on spinach farms that led to disease outbreaks that killed three people, sickened hundreds, and forced one of the biggest product recalls in history, documents and interviews show.

Overwhelmed by huge growth in the number of food processors and imports, however, the agency took only limited steps to address the problems and relied on producers to police themselves, according to agency documents.

With the Ramapo Mountains forming a rugged backdrop, the stretch of New York State Thruway between Exit 15A and Exit 16 is a pleasant, mostly straight and altogether unremarkable ribbon of highway, looking every bit the prototypical interstate designed to take drivers quickly and safely from city to city.

But recently, it has become the Bermuda Triangle of the New York region’s highway network, an unlucky 13 miles that has claimed 25 lives in the past decade, the last three in March, a disproportionately high number. Yet after considerable hand-wringing and analysis, state troopers and transportation officials cannot seem to find anything wrong with the roadway.

Boris Yeltsin, the man who saved Russian democracy so that Vladimir Putin could dismantle it, has died at the age of 76.

He got drunk and fell off a bridge once. Then he presided over the final wreckage of his country. If anyone ever wants evidence of what the two worst economic models of the 20th century -- Soviet communism and Washington neoliberalism -- can do for a nation, go ask a Russian.

Clarence Thomas is the most intriguing and perplexing of the U.S. Supreme Court's nine justices. Sixteen years ago, Thomas narrowly won Senate confirmation following an ugly debate over unproved allegations of sexual harassment. Once on the court, Thomas quickly began articulating a consistent, conservative judicial philosophy in which the original intent of the Constitution's framers, as best that can be determined, trumps all other arguments and considerations.

Yet personal complexities, if not contradictions, accompany Thomas' legal consistency. He is usually silent when the court hears oral arguments, allowing such highly talkative colleagues as Antonin Scalia and new Chief Justice John G. Roberts Jr. to dominate the questioning. Off the bench, Thomas is the most accessible justice, hosting groups of visiting schoolchildren and chatting up strangers when he and his wife, Ginni, drive around the country in their comfortable motor home during vacations. Yet he refuses to speak with most journalists, even though most of his fellow justices have become increasingly chatty with legal reporters.

I don't care if Alec Baldwin's daughter is 11 years old or 12 years old or however old she is, she is a disgrace and her treatment of her father is beyond the pale. . . . Apparently this "rude, thoughtless little pig," as called her, who doesn't "have the brains or the decency as a human being," either doesn't know or doesn't care how her inconsiderate actions affect her father. While not answering the telephone when your father calls may seem trivial, even the smallest of cruelties can be very hurtful to a parent. Fathers are extremely vulnerable and children should be very careful about what they say and do to them. Above all fathers need to know that their children love them. What Alec Baldwin's daughter did to him is the kind of thing that could emotionally scar him for life.

Photograph by Suzy Allman for The New York Times

Posted by Shaun Mullen at 4:40 AM
Email ThisBlogThis!Share to TwitterShare to FacebookShare to Pinterest

The state police were actually wondering if there is something wrong with the Thruway? You've got to be kidding me. They had no idea that it's (most often) idiot drivers who cause death on the interstate? Idiot drivers driving wrecklessly, not slowing down in snow or even in rain, and more idiots still driving recklessly. I tell ya, it's hard to have sympathy for the fool who dies while driving his car out of control, while not being safe and driving the speed limit while always paying attention to everything around him.