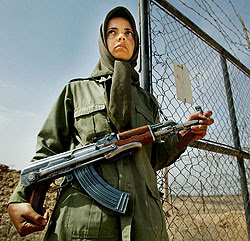 A member of the Mujahedeen-e-Khalq

You’re either with us or you’re with the terrorists.

The world is a big and messy place, and even more so in a post-9/11 world where it is sometimes tough to figure out who your enemies are, let alone your friends.

So I have to cut the Bush administration some slack when it comes to the alliances of convenience that have emerged between and certain nations and groups over the last six years.

Having duly noted that, I am having a hard time accepting that:

* Over the objections of the government and the State Department, which lists it as a terrorist organization, the provides military escorts in I for Mujahedeen-e-Khalq (MEK), a group to which Saddam Hussein contracted out killings during the Shiite uprisings.

* While excoriating for advising and funding Sunni insurgent groups in , the provides advice and funnels money to Jundullah, the Irani branch of a Sunni terrorist group that is an offshoot of Al Qaeda and operates along the Iran-Pakistan border.

* While asserting that it would go anywhere to hunt down Al Qaeda leaders, the U.S. shelved three successive plans to strike the northern Iraqi base of Abu Musab Zarqawi, the blood-thirsty Jordanian militant, in 2002 and early 2003 because it would undercut its case for going to war against Saddam Hussein.

Alliances of convenience are as old as civilization itself, and the U.S. has a long record of cozying up to strongmen and tinhorn dictators, notably in Central America, when it has suited its commercial and military purposes.

But the 9/11 attacks supposedly changed everything, and it is difficult to square the Bush administration's anti-terrorist bellicosity with it's hush-hush relationships with groups like MEK and Jundullah because in the end it further undercuts the U.S.'s already shaky standing.

Perhaps what President Bush should have said was:

You’re against us unless you’re with us.