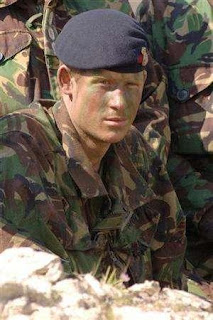 The lie that the is drawing down its forces in and will be out of altogether in the not too distant future because the area has been stabilized has had an unexpectedly serious consequence that has a name:

Prince Harry, the dashingly handsome (handsomely dashing?) 22-year-old son of Prince Charles and the late Lady Diana, is third in line of succession to the British throne, but has more pressing business to take care of before he is fitted for a crown and scepter.

Harry is a cornet in the Blues and Royals, a mechanized tank regiment of the Household Cavalry in the British Army and his unit is scheduled to rotate to . Harry’s job would be to lead a force of Scimitar armored reconnaissance vehicles on the Iraq-Iran border.

Scimitars are fast and agile, but they also are especially vulnerable to IEDs and there is some question about whether Prince Harry’s superiors will let him get his hands dirty considering the level of violence in Basra and thereabouts. The British casualty rate has been skyrocketing and nearly 30 soldiers have died in the last month.

For his part, Harry has made it clear that he will leave the Army if he is left in safety.

So what’s a commanding general to do? Robert Fox, writing in The Guardian, observes that:

"Undoubtedly we will get the usual blather from 'friends of the prince' in the red-top tabloids saying that 'Harry will quit the army, if he is refused ' etc, etc. The army chiefs are mindful of not inviting a publicity own goal after the navy's self-inflicted bruises to image and ego with the soap opera of the 15. In the great list of operational problems now facing the forces and the government, Harry is little more than a footnote. The way things are going in and , his commanders know they have bigger and more serious fish to fry."

As someone who is 100,000th or so in line of succession to the throne (I’m not making this up), I heartily concur.
Posted by Shaun Mullen at 5:13 AM
Email ThisBlogThis!Share to TwitterShare to FacebookShare to Pinterest