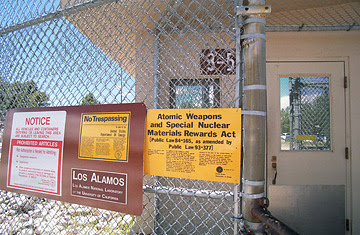 It was only after several years on the job that she was caught with bomb designs in her trailer and fired. But the investigation reveals that Quintana had taken her cell phone into a vault filled with secret documents where she worked — another major security violation. She also had access to a high-speed classified printer, even though such access was "not required by her job," and used the device to run off hundreds of copies of classified documents that she also brought home. The young woman received inadequate supervision — government documents show that the security administrator responsible for Quintana's area was not around roughly half the time, because that person had "other duties." Quintana's lawyer, Stephen Aaron, told Time that, on occasion, she would be locked into a secure vault to work until colleagues returned. "We hope that the lessons learned from this episode can be used to make the Lab more secure in the future," he added.

Quintana's motive for breaching the rules appears to have been benign: Falling behind on her work scanning paper copies of nuclear-weapons designs into a digital format, she would save highly-classified documents onto a "thumb drive" and then take the material home to work on after hours, she has said.

It’s a fair bet that you have never heard of a guy called Dave Gaubatz. It’s also a fair bet that you think the hunt for weapons of mass destruction in Iraq has found absolutely nothing, nada, zilch; and that therefore there never were any WMD programmes in Saddam’s Iraq to justify the war ostensibly waged to protect the world from Saddam’s use of nuclear, biological or chemical weapons.

Dave Gaubatz, however, says that you could not be more wrong. Saddam’s WMD did exist. He should know, because he found the sites where he is certain they were stored. And the reason you don’t know about this is that the American administration failed to act on his information, ‘lost’ his classified reports and is now doing everything it can to prevent disclosure of the terrible fact that, through its own incompetence, it allowed Saddam’s WMD to end up in the hands of the very terrorist states against whom it is so controversially at war.

A military investigation has found that senior Marine Corps commanders in Iraq showed a routine disregard for the lives of Iraqi civilians that contributed to a “willful” failure to investigate the killing of 24 unarmed Iraqis by marines in 2005, lawyers involved in the case said.

Washington has taken in only some 500 Iraqi refugees since the war began. The Bush administration promises to do much better this year, and officials are floating hypothetical numbers as high as 25,000. That would help. But the bumbling track record of this administration’s refugee bureaucracy makes it seem unlikely. And under current policy, some of Iraq’s most desperate refugees could be deemed ineligible under provisions of the Patriot and Real ID Acts that treat ransom paid to free relatives from kidnappers as “material support” for terrorism.

Within hours of Cpl. Pat Tillman’s death, the Army was engaged in an information lockdown. Phone and Internet connections were cut off at a base in . Guards were posted on a wounded platoon mate of his. A captain ordered a noncommissioned officer to burn Corporal Tillman’s uniform.

Army investigative documents reviewed by The Associated Press describe how the military tried to seal off information about Corporal Tillman’s death from all but a few soldiers. Officers quietly passed their suspicion — that he had been killed by American fire — up the chain of command to the highest ranks of the military, but the truth did not reach his family for five weeks.

Q: Does the President ever get tired of having to express his full confidence in the people around him these days?

MS. PERINO: When you're President of the and you have this many folks that you are employing, it's a pretty small number that he's had to express full confidence in. All of us who serve at the pleasure of the President, if the moment he doesn't have full confidence in you, you no longer work for him. And we all take that very seriously.

You've undoubtedly heard the story of the scandal surrounding World Bank President Paul Wolfowitz and the generous salaries and favors he provided to his girlfriend, Shaha Ali Riza, in his capacity as president of the Bank. But look what Sid Blumenthal has dug up. The strings Wolfowitz pulled for Riza, the plums and sinecures go back into his time in the government -- unexplained security clearances provided to a foreign national, special contracts apparently cooked up especially for her with tax dollars. I had a hard time keeping all the intricacies and details straight in my head. But there definitely seems to be a story there. Oh, and Dick Cheney's daughter Liz -- MidEast democracy czar installed at the State Department to keep the neocons flame burning -- she's in the mix too.

Australia has warned that it will have to switch off the water supply to the continent's food bowl unless heavy rains break an epic drought - heralding what could be the first climate change-driven disaster to strike a developed nation.

The Murray-Darling basin in south-eastern yields 40 per cent of the country's agricultural produce. But the two rivers that feed the region are so pitifully low that there will soon be only enough water for drinking supplies. Australia is in the grip of its worst drought on record, the victim of changing weather patterns attributed to global warming and a government that is only just starting to wake up to the severity of the position.