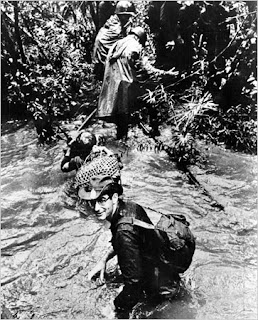 Like many an aspiring young journalist of my generation, I wanted to be like David Halberstam when I grew up.

The prolific Halberstam, who died yesterday at age 73 in a car crash in Menlo Park, California, was one of a small handful of reporters who saw through the deceits and obfuscations of U.S. military commanders in Vietnam early in the war and wrote that the corrupt South Vietnamese government would be brought to ground by the Communist guerrillas and North Vietnamese sooner or later.

Halberstam shared a Pulitzer Prize in 1964 for his New York Times dispatches, which infuriated generals and politicians who accused him of being unpatriotic and harming the troops. Such accusations reverberate loudly today in debates over whether the news media is accurately covering the war.

Halberstam's The Best and the Brightest and Frances FitzGerald’s Fire in the Lake, both published in 1972, are to my mind the two finest works on the roots of involvement in

I didn’t exactly become a David Halberstam when I did grow up, but he taught me a valuable lesson that became my mantra during a long journalism career:

Don’t merely write what happened, explain what it means and why the reader should care about it.

There is no higher praise than that former Times columnist Anthony Lewis bestowed on Halberstam:

"It’s obvious that he was probably the greatest journalist of his generation. He had a core integrity that gave him credibility and power, whether he was writing about basketball or Vietnam it carried an enormous amount of weight. He was a sweet man—loyal, kind, thoughtful. I just didn’t know anybody who is a better representation of journalism."

Herewith an excerpt from an interview with Halberstam about Vietnam and Iraq:

"I think and are different and yet there are a lot of parallels. There’s enough there to make you very uncomfortable if the way you see these things is shaped by our experience in Vietnam, as it is for me and so many of the senior military people . . . .

"I remember during there was a generation of correspondents, some of the older ones, who were very tough on us younger correspondents because they had been in or World War II and those wars had worked and there was a legitimacy to what we did then. And some of them were very quick to put down the younger reporters who were saying, 'This doesn’t work.' I had vowed never to be one of those who says, 'Guys, you just don’t know . . . I was in and I know things you don’t know.' You know, pulling seniority and perhaps living in the past. So I was somewhat reluctant to talk too much about . But gradually, as we got nearer to it, I began to speak out.

"There were four or five points I was trying to make before the invasion. One was that we were going to punch our fist into the largest hornet’s nest in the world and end up doing the recruiting for Al Qaeda. I said that I thought that we would do the race to very well—that the sheer military part would go well because our military is just very good, marvelous people, and our technology is awesome. But then the battle would change; we would be involved in urban guerilla warfare, and things would turn against us.

I said that I thought the movie that they were all watching in the White House and the Pentagon was Patton, and the movie they should have been watching was The Battle of Algiers [the 1966 quasi-documentary film about the Algerian struggle for independence from in the late 1950s].

There is a moment in a war—as there was in and as there will be in this war—where your military superiority is undermined or neutralized by your political limitations. And I thought the biggest miscalculation of all was a great underestimation of the colonial factor, just as there had been in . In the absolutely had refused to factor in the effect of the French Indochina War. And I felt the specter of colonialism would be a problem again in a more complicated way with Islam.

The greatest miscalculation was not about the weapons of mass destruction, but the idea that we would be greeted as liberators. When the Bush people kept talking about that, alluding to what happened in and after World War II, well, anybody who had been in would have been wary of it. There was just no way we were going to be greeted as liberators in this part of the world. The Iraqis might want to get rid of Saddam Hussein, but they would not want us to do it for them."

Photograph by Horst Faas/The Associated Press
Posted by Shaun Mullen at 4:56 AM
Email ThisBlogThis!Share to TwitterShare to FacebookShare to Pinterest