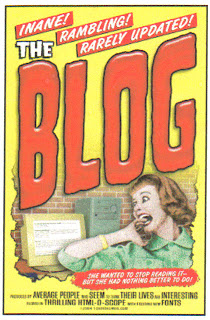 My old friend Will Bunch is one of the best bloggers around. This is in no small part because he is a very fine reporter and writer and has honed his Pulitzer Prize-winning skills over two-plus decades in the newspaper business.

Will never has been content to rest on his laurels. He has worked tirelessly not only to save his own imperiled newspaper (and my longtime former employer), the Philadelphia Daily News, but to make it and all newspapers better, most especially as guiding forces in American society.

"[M]uch of the blame really lies with us, as journalists. We have, for the most part, allowed our product to become humorless and dull. In an era when it seems most people truly will be famous for 15 minutes, newspapers have stubbornly avoided creating personalities . . . or having a personality, for that matter. In a pathologically obsessive quest for two false goddesses -- named Objectivity and Balance -- we have completely ceded the great American political debate to talk radio, cable TV and the Internet, where people have learned that politics is actually interesting and even fun when people are allowed to take sides.

We prefer to talk down to the public rather than talk to them. Even at our very best - and there are many, many talented newspaper journalists in - we are more likely to aim at wooing contest judges than at wooing new readers. And we have a knee-jerk tendency to defend our narrow world of messy ink printed on dead trees, when instead the time is here to redefine who we are and what we do."

To that end, Will is taking a few weeks off from blogging at Attytood to work on growing the relationship between journalists and bloggers and strengthening two-way communications with the communities that they serve.

Will is a good talker, but he's also a great listener. He welcomes your thoughts.

Click here to learn more. You can email will at bunchw@phillynews.com Tell him that I sent you.

Posted by Shaun Mullen at 4:59 AM
Email ThisBlogThis!Share to TwitterShare to FacebookShare to Pinterest