The Great Writ Survives: Liberty & Security Reconciled In the Age of Bush 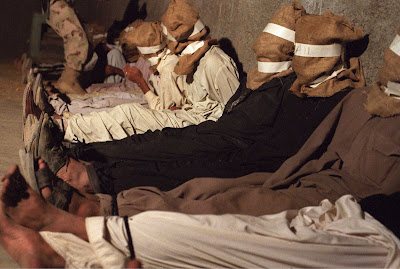 The laws and Constitution are designed to survive, and remain in force, in extraordinary times. and security can be reconciled; and in our system they are reconciled within the framework of the law. The Framers decided that habeas corpus, a right of first importance, must be a part of that framework, a part of that law.

The mere notion that The Great Writ should not apply to the people that a presidential administration views to be enemies is so un-American that it still boggles the mind that George Bush, Dick Cheney and their minions have done that very thing by using the 9/11 attacks as a pretext and part of a larger imperial power grab unprecedented in presidential history. And have pretty much gotten away with it.

A conspicuous exception is an odoriferous law passed at the White House's insistence by a cowed and compliant Congress known as the Military Commissions Act, which the Supreme Court ruled for the third time yesterday is out of legal bounds because of its suspension of habeas corpus and other kangaroo court trappings.

Justice Anthony Kennedy, writing for the majority in a 5-4 ruling that broke down along partisan lines, declared that terrorism suspects at Guantánamo Bay have constitutional rights and can appeal their cases to civilian courts.

Kennedy's opinion -- which was a reflection of the fears of the majority that innocent people could be confined indefinitely without due process, even for the rest of their lives -- was a deft balance between civil liberties and national security concerns. The dissenters seemed genuinely horrified that if detainees were allowed their day in court information could come out that would help their brother terrorists and worst yet, information could come out that would lead to their release, a concern that is mitigated by the reality that no one can predict how those civilian courts will respond to the appeals.

For what it's worth, the ruling would have been 6-3 if Sandra Day O'Connor, who in 2004 declared that "A state of war is not a blank check for the president" was still on the court.

In any event, it was a timely reminder of the great mischief that a President McCain, who was one of the prime movers behind the detainee act, would work in filling future high court vacancies given that the two current justices he says he most idealizes are right-wing extremists Antonin Scalia and Samuel Alito.

For his part, Scalia wrote in his dissent to the ruling that it is a "game of bait-and-switch . . . [that] plays upon the Nation's Commander in Chief and will make the war harder on us. It will almost certainly cause more Americans to be killed." He also claimed that 30 detainees who had been voluntarily released from Guantánamo by order of the Bush administration had returned to "the battlefield," which means that in his draconian mind even people deemed innocent in the administration's view are actually guilty.

Yes, you read that right.

The consequences of the ruling are indeed huge, if limited to what the president and Congress can do, something that Scalia willfully ignores in his rebuke, while there are three aspects in particular that are being little commented on:

* The Bush administration has done an abominable job of protecting America's national security.

This includes creating a rump legal system of military tribunals and creating a new category of perpetrator -- the enemy combatant -- when there was nothing wrong with a civilian legal system that has served us well through 225 years of war and peace.

* A consequence of these travesties is that some really bad people may go free.

This is because when their detentions are appealed to federal district courts as mandated by the ruling, tales of lack of access to counsel, the destruction of evidence and, of course, the use of torture, will come tumbling out. As it is, some 100 of the 270 or so detainees are said to be Yemenis whom the U.S. has feared would be set free by their anti-U.S. government if they were to be repatriated.

* The Bush administration's legal justification of the detentions is darkly hilarious.

The administration has argued that Guantánamo detainees do not have habeas rights because the U.S. government does not have legal sovereignty over the Navy base and its lease agreement with Cuba states that Cuba retains "ultimate sovereignty." This. of course, is an effective fiction since no president since Eisenhower has treated that country with a modicum of respect, let alone honored a land deal with it.

The ruling means that the 19 habeas suits that have been filed in civilian courts can presumably go forward and it is probable there now will be many more suits, but don't expect the Justice Department to help expedite the process.

The first of the three rulings against the Bush administration regarding Guantánamo came in Jun 2006 in Hamdan v. Rumsfeld, a case involving Salim Hamdan, a Yemeni who was Osama bin Laden's driver and bodyguard before he was captured in Afghanistan. Guess what? Hamdan's status hasn't changed one iota in the last two years although his name is now all over law books.

Finally, there is the question of what will happen to Guantánamo itself now that a core legal rationale for its existence as the flagship of the Rumsfeld Gulag has been undercut.

Defense Secretary Robert Gates, who favors closing it, conceded last month that "we're stuck" in Guantánamo because no one has been able to figure out where to incarcerate the most dangerous of the detainees -- about 80 in all by general agreement.

Public sentiment, such as it is, would appear to be on the White House's side, and let's not forget that the Military Commissions Act and other excesses of the imperial Bush presidency would not exist without the support of a lot of Democrats and not just those right-wing Republican loons.

The response to the ruling from the administration was par for the course. The president said that he would abide by it, which he has said twice before while imperiously trying to work around the previous rulings. The Justice Department was so cowardly that told reporters that its press conference on the ruling was strictly off the record, while Attorney General Mukasey harrumphed that the Guantánamo trials would continue despite the ruling although he knows full well that the ruling was not about the right to have the trials, only their extra-legal nature.

There has been little public outrage, let alone discussion, over the administration's Orwellian actions and erosion of civil liberties in general, and most Americans evince little concern about terrorists intent on destroying the U.S. being denied the constitutional rights that underpin our society. In fact, I always provide a link to an explanation of what the heck habeas corpus is when I write about it because it seems like even that foundation principle -- yes, it's known as the Great Writ -- is barely understood and less appreciated.

As it was, none of the three major networks led their Thursday evening newscasts with the most important Supreme Court ruling in years. The big story was bad weather in the Midwestern U.S.

"As it was, none of the three major networks led their Thursday evening newscasts with the most important Supreme Court ruling in years. The big story was bad weather in the Midwestern U.S."

Shaun, and that is why we must continue to Blog about this, as it is not covered adequately by main street media. I posted who voted against restoring habeas corpus last Sept. on my most recent post to remind voters who the scoundrels are we must work to remove from Congress. John McCain is one followed by most, but not all Republicans, and of course Sen. Leiberman.

Scalia should be impeached for that remark.