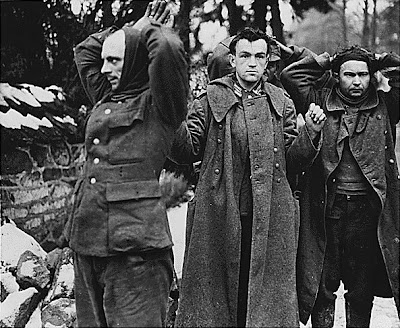 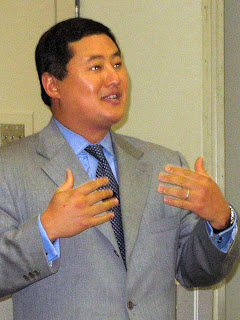 I have not supported calls to oust John Yoo from his tenured position at the UC Berkeley School of Law because of his despicable and key role in the Bush administration torture regime, but after reading his op-ed piece in the Wall Street Journal this week I am changing my mind. This is because the man who wrote the infamous memo justifying the use of Nazi-like torture techniques is so willfully ignorant.

Yoo noted in the op-ed that last week's Supreme Court decision in Boumediene v. Bush has been portrayed as a stinging rebuke of the administration's antiterrorism policies:

"From the celebrations on most editorial pages, one might think that the court had stopped a dictator from trampling civil liberties. Boumediene did anything but. The 5-4 ruling is judicial imperialism of the highest order."

Okay, let’s file that under the category of "strong opinion," but what comes a little further down is absolutely mind blowing for a man who teaches at one of the nation's leading law schools.

"In World War II, no civilian court reviewed the thousands of German prisoners houses in the U.S.

" . . . Judicial micromanagement will now intrude into the conduct of war. Federal courts will jury-rig a process whose every rule second-guesses our soldiers and intelligence agents in the field. A judge's view on how much 'proof' is needed to find that a 'suspect' is a terrorist will become the standard applied on the battlefield. Soldiers will have to gather 'evidence,' which will have to be safeguarded until a court hearing, take statements from 'witnesses,' and probably provide some kind of Miranda-style warning upon capture. No doubt lawyers will swarm to provide representation for new prisoners."

Of course no civilian court reviewed the cases of those Germans because they were prisoners of war under the Geneva Conventions and tried by traditional military courts. They were extended habeas rights and, by the way, protected from harsh interrogation techniques, among other unpleasantries.

Yoo, of course, used legal mumbo jumbo to argue that detainees at could be tortured because they were considered to be enemy combatants, a classification created by fevered administration minds, and not covered by the conventions and other international laws under a rump legal and detention system codified in the Military Commissions Act. This was the law that the Supremes struck down for the third time as being out of legal bounds because of its suspension of habeas corpus and the act's other kangaroo court trappings.

As Cernig at Newshoggers, among other commentators note, had detainees had POW status, there in all likelihood already would have been dozens of trials -- not the paltry mere handful because of the mess the Bush administration has made of its role in the Global War on Terror. Those found guilty would have been sentenced, some perhaps to death, and we wouldn't have the sniveling John Yoo with his blindered knowledge of history and sycophancy to contend with.

John McCain keeps stepping on his willie in using Yoo's talking points to lash out against the Boumediene decision, but not even Yoo is not likely to agree with the claim of John Lehman, one of the presumptive Republican nominee's handlers, that the fact the perps in the 1993 World Trade Center bombing were tried in civilian courts was a "material" cause of the 2001 attacks.

"Grand jury evidence in the 1993 bombing was put under seal and not made available to the CIA, thus denying the agency timely access to information that 'would have enabled many of the dots to be connected well before 9/11 and . . . give a good chance to have prevented' the later attack."

Inconveniently for McCain, the record shows that CIA operatives, as well as several FBI agents, had a pretty damned good idea that the 9/11 attacks were pending. They had identified several of the hijackers and knew at least three were in country and taking flying lessons. In fact, there was a unit within the CIA focusing on Osama bin Laden and his crew. It was dubbed the "Manson Family" by the agency's complacent cynics because of its zealotry.

But the people in the know not only couldn't hold the attention of their bosses and they were told to buzz off, or in the case of the OBL unit, openly ridiculed.

IT DEPENDS ON HOW YOU LOOK AT IT

The rationalizations used by Yoo and others to defend the torture regime range from the sublime to the ridiculous, but CIA counterterrorism lawyer Jonathan Fredman deserves a special prize:

"Torture 'is basically subject to perception,' Fredman told a group of military and intelligence officials gathered at the U.S.-run detention camp in Cuba on Oct. 2, 2002, according to minutes of the meeting. 'If the detainee dies, you’re doing it wrong.' "

The minutes were one of about two dozen documents released by a Senate panel investigating how Pentagon officials developed the interrogation program introduced at Guantánamo in late 2002 and suggest a larger CIA role in advising Pentagon interrogators than was previously known.

WIPING ITS ASS WITH THE GENEVA CONVENTIONS

The Bush administration has not merely ignored the Geneva Conventions – as did the North Vietnamese through the horrid captivity of McCain and other POWs – but like those captors has wiped its collective ass with them:

The International Red Cross was intentionally kept in the dark about detainees' locations and abusive treatment.

* A team of medical experts examined eleven former detainees and found that, in their expert opinions, they had experienced severe pain and long-term suffering - the very definition of torture.

One of the detainees examined by doctors for Physicians For Human Rights was Laith, an Iraqi:

"[He] recounted that during his initial detention in an unknown prison, he was brutally beaten and kicked until he lost consciousness. In Abu Ghraib, he was kept naked for almost a month in a variety of stress positions in isolation in a small, dark cell wearing soiled underwear and was subjected to lengthy interrogations.

"On one occasion he was brought to see his brother who was bleeding, naked, and humiliated. The most painful experience for Laith was the threat of rape of his mother and sisters: 'They were saying, 'you will hear your mothers and sisters when we are raping them (here).' "

TORTURE QUOTE OF THE WEEK

"This looks like the kind of stuff Congressional hearings are made of. Someone needs to be considering how history will look back at this."

Not to worry, Mr. Fallon.

RUMSFELD GETS THE BALL ROLLING

Although there had been small leaks in the dam holding back the truth about the Bush torture regime, it remained a deep, dark secret for years that the use of torture did not begin with a few rogue enlisted men at Abu Graib or Guantánamo, but started at the very top of the administration and percolated down from there. But with publication earlier this year of the meticulously researched Torture Team: Deception, Cruelty and the Compromise of Law by Philippe Sands, the dam broke.

The BBC has made available an excerpt from the first chapter of Torture Team online. It begins:

"Only a few pieces of paper can change the course of history. On Tuesday, 2 December 2002 Donald Rumsfeld signed one that did.

"It was an ordinary day. The Secretary of Defense wasn't travelling. No immediate decisions were needed on Iraq and Washington awaited Saddam's declaration on weapons of mass destruction.

"The only notable public event in the Secretary's diary for that day was the President's visit to the Pentagon to sign a Bill to put the Pentagon in funds for the next year. Signings are big, symbolic public events.

"They offer an opportunity to lavish praise and on this occasion neither man showed restraint. The Secretary of Defense introduced President Bush effusively as our 'leader in the global war on terrorism'. The President thanked Mr Rumsfeld warmly, for his candour, and for doing such a fabulous job for the American people. The United States faced unprecedented challenges, Bush told a large and enthusiastic audience, and terror was one of them. The United States would respond to these challenges, and it would do so in the 'finest traditions of valour'. And then he signed a large increase in the Defense budget.

That same day, elsewhere in the Pentagon, a less public event took place for which there was no comment, no publicity, no fanfare. With a signature and a few scrawled words Donald Rumsfeld cast aside America's international obligations and reneged on the tradition of valour to which President Bush had referred. Principles for the conduct of interrogation, dating back more than a century to President Lincoln's famous instruction of 1863 that 'military necessity does not admit of cruelty', were discarded. His approval of new and aggressive interrogation techniques would produce devastating consequences."