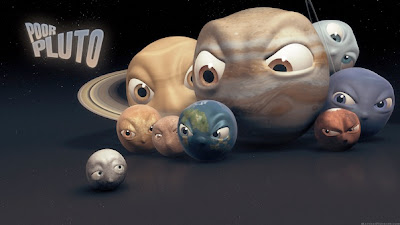 After years of bitter debate, astronomers in August 2006 reclassified Pluto as a "dwarf planet" and elevated two other small celestial bodies to that new classification, a controversial move that left in its wake a pressing question:

While I'm all for integrity in astronomy, what about those solar system mobiles hanging in classrooms? Didn't the astronomers consider the consequences of Mrs. Crabapple and teachers the world over having to take a scissors to Pluto? Wouldn't the mobiles get all lopsided, or something?

Maybe astronomers have indeed weighed the consequences, because the International Astronomical Union, which tooketh away Pluto's name and designation, decided this week to refer to it as a plutoid.

That still doesn't go far enough for some stargazers, who vow to return the old gal to full dignity.

Image by Mathias Pedersen
Posted by Shaun Mullen at 1:11 AM
Email ThisBlogThis!Share to TwitterShare to FacebookShare to Pinterest