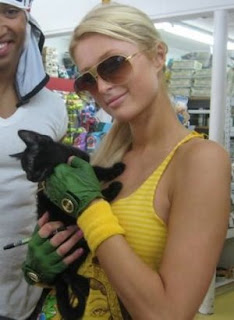 It has been way too long since I blogged about Paris Hilton, but the animal lover in me doesn't like one damned bit the latest report that she just can't seem to treat her pets as well as she treats herself.

"Paris Hilton hates kittens, especially her shivering, terrified cat Prada, who has ‘rarely been held or socialized,’ according to the Kris Kelly Foundation. The foundation let Hilton adopt the innocent kitten . . . and has been witness to her heartless cruelty ever since. Cat-hating Hilton didn't neuter Prada for more than six months, and then when she finally took him in she forgot about helpless Prada and abandoned him at the vet for a week until he was rescued by the Kris Kelly Foundation. . . .

"Paris' reps have been quoted saying she thought the kitty would be delivered home from the vet, like a pizza. But that hardly blunts the Kris Kelly Foundation's allegations."

Posted by Shaun Mullen at 1:17 AM
Email ThisBlogThis!Share to TwitterShare to FacebookShare to Pinterest

www.soria-3d.com said...
This comment has been removed by a blog administrator.
2:11 PM