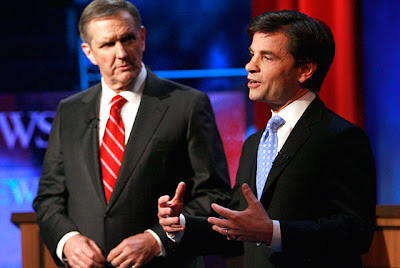 Last summer, after watching and writing about the Democratic presidential debate held at the Yearly Kos (now called Netroots Nation) convention in , I wrote an article saying that the public really asks better -- and even more interesting -- questions of the candidates than our professional news media. And that was long before the now infamous Gibson-Stephanopoulos Massacre here in Philly.

Comes now Eric Boehlert with the case for getting the media out of the proposed Obama-McCain town hall meetings, and much of the rest of the race, too. He notes that the two candidates rejected an ABC News offer to hold a town hall meeting with the glitzy Diane Sawyer as moderator, that would only be broadcast on ABC and not any other outlet:

"Specifically, the message from both of the campaigns, the blog reader, and the actress was the same regarding presidential forums and debates: We need to see the candidates unfiltered, without high-paid journalists prancing around onstage, in mad pursuit of gotcha moments or spinning incidental debate encounters furiously afterward, and generally mucking everything up.

"In other words, campaign journalism is dead. Maybe town hall forums and old-school debate formats, with a diminished role for the media, will save us this campaign cycle.

Editors, producers, reporters, and pundits have only themselves to blame as the campaigns move to shove the press to the sidelines -- a move that will likely be cheered by voters. Because, again, if we look at the primary season as the media's audition for the general election, the media failed miserably."

A total sham of course… unless you’re impressed by the fact that the McCain camp could come up with perhaps 2 or 3 Democrats that anybody's ever heard of (and even that's a stretch), and 30 total in the entire country, that are planning on going with McCain in November.

The burning question, I guess, is whether Susie Tompkins Buell, Larry Johnson, Lanny Davis, and other assorted dead-enders join the cause.

Last summer Andrew Cordesman described Iraq as "three-dimensional chess in the dark while someone is shooting at you." Now the shooting has subsided somewhat, but no one has turned the lights on.

Political consultants are always yammering about what a good idea it is to get the most damaging information out in the open ASAP, and on the candidate's own terms. Which is why I suspect Michelle Obama of cannily revealing that secret terrorist handshake in literally the very first moment it was safe to do so, on the very night her hubby acknowledged that he had closed the deal. The true genius, of course, was in the foresight and field work of spending the last 15 years getting millions of hapless suburban tweens and their hopelessly unhip parents thinking that this menacing shout out to fellow jihadists was harmless as a high-five; is there no end to this woman's perfidy? And that “baby mama” thing? Doubtless a plant, designed to deflect attention from the soon-to-be-released video of Michelle complaining about her husband's general messiness, and shouting, "Why'd he leave out the butter? Why'd he leave out the socks?'' Not to mention—oops, just did!—the shocking follow-up footage in which she asks a neighbor, "D'you see that?'' Let's just say I'll be curious to see what job that Fox "producer'' gets in the Obama administration.

I see that a lot of the folks over at The Next Right like attacking Barack Obama by tying him to Jimmy Carter. One of the foremost problems with this is that half of today's voters are too young to get the reference. The median voter is 46 years old, meaning that they were 17 when Carter left office, and presumably not paying too much attention to macroeconomic phenomena.

I had a dream the other night.

In my dream, I was standing on the curb of a street watching a parade go by. There was something about this parade, though, that wasn't quite right. The marching bands, the drum and bugle corps, the floats – even the pretty girls twirling batons – all looked pretty much the same. They were vaguely familiar; like you’ve met them in your dreams before but never in real life.

Then it hit me. That high stepping drum major looked just like George Bush. The little girl twirling the baton? George Bush. The beauty queen on the float? Ditto. Even the trained dog looked like Bush.

Everywhere you looked, George Bush looked back. Then I noticed the crowd around me. OmiGod! Those beady eyes. That smirk!

At that point, I woke up in a cold sweat. Thank God. I puttered into my office and turned on the internets, going immediately to Memorandum to see what people were writing about. An article caught my eye and after reading the headline, my blood froze, my mouth opened in a silent scream of anguish and despair.

It can't be, I told myself. But there it was in black and white – my metaphorical dream come to life:

Lieberman explains that he calls himself an "independent Democrat" because the Democratic Party's foreign policy ideals "exist in me today independent of the current Democratic Party, which has rejected them." This is a wildly egocentric interpretation. Democrats started questioning the war because the war was going badly, while Lieberman remained--to borrow a phrase--in a spider hole of denial.

Honestly, I wish I could just post this entire Wall Street Journal article, but considering you have to be a subscriber to access it online, that's probably illegal. It begins, "The launch of Rex Rammell's Senate bid didn't go as planned. The mud pit and the monster trucks were an insurmountable distraction. The would-be supporters were too drunk to think about the election." Classic, right? Here's what you need to know: