Democratic Leaders Stick It To Obama 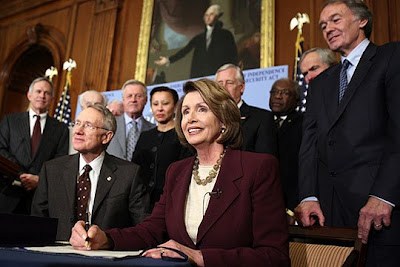 One of the tragic consequences of the 9/11 attacks has been the acquiescence of the so-called Loyal Opposition to the Bush administration's extralegal war and extraordinary abridgment of civil liberties.

There certainly came a time after the dust had settled at Ground Zero when the Democrats should have begun pushing back in a serious and sustained way. With few exceptions, they have not done so even after winning convincingly in the 2006 mid-term elections.

I was going to write about that but the estimable Booman beat me to it:

"There's no question that Barack Obama has been riding the wave of a generational zeitgeist, having captured in an elegant form the feelings of disgust and longing and sudden hardship of the younger half of America. There is no question about that. But even though that's been the case until now . . . now, Barack Obama has cracked up on the shoals and rang out a tremendously discordant note.

"The whole party has been riding on the crest of a high wave that promises to inundate and destroy the rot of a Washington Establishment that has failed us . . . dishonored our past and robbed us of the future we deserved and our children deserved. But we cannot forget that Barack Obama is but one man. And the Washington he hopes to lead is currently run entirely by the very people that have been instrumental in the failures that have so disappointed the nation. What has happened is that failures like Jay Rockefeller and Silvestre Reyes, and political strategies like those espoused by the Blue Dogs and the Democratic Leadership Council's New Democrats, have reached up from beneath the sea foam and tossed Obama off his board. Obama is a skilled surfer of political waters, but he is not a world champion. Not yet, anyway.

Posted by Shaun Mullen at 5:50 AM
Email ThisBlogThis!Share to TwitterShare to FacebookShare to Pinterest

Anonymous said...
This comment has been removed by a blog administrator.
8:34 AM