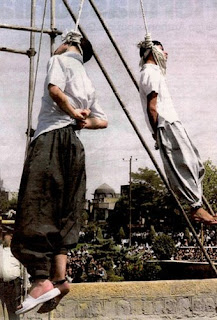 Just when you think that the Blackwater private military juggernaut couldn't say or do anything more outrageous, it has asked a federal court to use Islamic Shari'a law in hearing a lawsuit by the widows of three American soldiers who died on one of its planes in Afghanistan.

The lawsuit "is governed by the law of Afghanistan," Blackwater subsidiary Presidential Airways argued in a Florida federal court. "Afghan law is largely religion-based and evidences a strong concern for ensuring moral responsibility, and deterring violations of obligations within its borders."

If the judge agrees, it would essentially end the lawsuit over a botched flight supporting the U.S. military because Shari'a law does not hold a company responsible for the actions of employees performed within the course of their work. Shari'a law also calls for the execution of gays, among other decidedly non-Western norms.