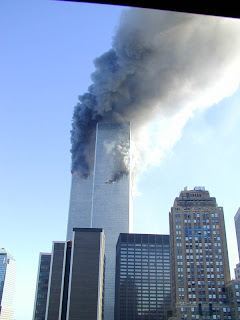 A top adviser to John McCain said another terrorist attack on U.S. soil would be a "big advantage" for the Republican presidential candidate, drawing a sharp rebuke Monday from both the presumed GOP nominee and Democrat Barack Obama.

Charlie Black, already in the spotlight for his past lobbying work, is quoted in the upcoming July 7 edition of Fortune magazine as saying such an attack "certainly would be a big advantage to him." Black said Monday he regretted the comment.

Black is also quoted as saying the "unfortunate event" of the assassination of former Pakistani leader Benazir Bhutto in December 2007 "helped us."

Questioned about Black's comments during a news conference, McCain said, "I cannot imagine why he would say it. It's not true. I've worked tirelessly since 9/11 to prevent another attack on the United States of America. My record is very clear."

. . . Obama spokesman Bill Burton said in a statement: "The fact that John McCain's top adviser says that a terrorist attack on American soil would be a 'big advantage' for their political campaign is a complete disgrace, and is exactly the kind of politics that needs to change. Barack Obama will turn the page on these failed policies and this cynical and divisive brand of politics so that we can unite this nation around a common purpose to finish the fight against al-Qaida."

The notion of an "enthusiasm gap" between Democrats and Republicans this year is not new. In fact, it’s been a staple of the political landscape for most of the year. Democratic voters were excited about their presidential choices; Republicans kept wondering if someone new might throw their hat into the ring. Democratic turnout broke records; Republican turnout was average.

The phenomenon was not limited to the nominating fights. . . . an NBC News/WSJ poll found that most of Obama’s supporters are motivated by their support for him. Fewer than 40% of McCain voters could say the same. The Journal's pollster noted, "It is not that these voters aren't for McCain." What’s lacking is "the enthusiasm, the passion, the energy" of the other side.

Various intangibles — Bush's record unpopularity, a struggling economy, dissatisfaction with the war in Iraq, a strong desire for change — make McCain's task difficult. But if voters inclined to support him aren't especially engaged, and aren't particularly excited about the campaign, it makes his campaign’s task all the more challenging. What’s more, it’s not just the horserace. The "enthusiasm gap" is manifesting itself in a variety of ways right now.

-- STEVE BENEN
I haven't seen this much anger in a long, long time. nothing has awakened normally complacent white Americans more than the prospect of America having an overtly nonwhite president.

-- BILLY ROPER
In an era of information and ideas moving at the speed of light, the rehabilitation has begun on both sides of the Atlantic.

Over here, David Brooks celebrates Bush's "stubbornness" and asserts that "when it comes to Iraq, Bush was at his worst when he was humbly deferring to the generals and at his best when he was arrogantly overruling them. During that period in 2006 and 2007, Bush stiffed the brass," took the advice of such strategic geniuses as Dick Cheney, John McCain and Lindsey Graham and, lo and behold, the Surge "has produced large, if tenuous, gains."

. . . On the other side of the ocean, Andrew Roberts of the Telegraph sees Bush as a latter-day Harry Truman "who set the United States on the course that ended decades later in the defeat of Communism.

"If the West wins the modern counterpart of that struggle, the War Against Terror, historians will look back in amazement at the present unpopularity of George W Bush, and marvel at it quite as much as we now marvel at the 67 per cent disapproval rates for Truman throughout 1952."

If, as the saying goes, wishes were horses, we would all be riding in style and George W. Bush would be leading the parade. It's comforting that we may be "misunderestimating" him, but there will be plenty of time to think about that when he is out power and has stopped saving the world.

-- ROBERT STEIN
Andrew Roberts in The Telegraph brushes the dust bunnies off the weak and overused Truman analogy to explain once again why the Bush administration -- which has been a perfectly evident disgrace to anyone not toting around a paper bag and several jars of rubber cement -- will someday be viewed as a triumph of democracy, whiskey and sexy.