Meanwhile, Back At The Forgotten War 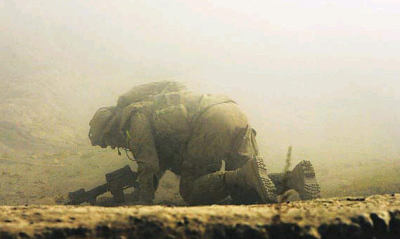 As I've said early and often and commencing shortly after the 9/11 attacks, Afghanistan is ungovernable. With its deeply rooted tribal culture, it always has been and always will be, but I did believe that the U.S.-led invasion could have the salutatory effect of crushing the Taliban and perhaps even capturing or killing their rich stepfather, Osama bin Laden, if we committed for the long haul.

What I only vaguely understood at the time was that the Bush administration is as incorrigible as the Afghans are ungovernable, which is why we will never know if the aforementioned objectives could have been achieved had the president's neocon puppet masters not had their eye on a certain presidential palace in Iraq and not the mountains of Tora Bora.

And so in March 2003, the U.S. took the Global War on Terror to downtown Baghdad and allowed the Afghan mission, which had been undersubscribed to begin with, to wither on the vine.

The less than shocking result, reports Der Spiegel, is that while there are 60,000 troops – as well as no fewer than 26 U.N. humanitarian and aid organizations – in Afghanistan, the Taliban are not defeated but resurgent, Afghan President Karzai has lost his mojo, the number of roadside bombings has increased fivefold since 2004, the number of armed attacks tenfold, and suicide bombing spiked at 130 last year compared to only three some three years earlier.

The only solution to this catastrophe, which should be laid directly at the feet of the Bush administration, is a huge increase in troop levels, which would mean draining them from the Iraq swamp, and in funding, which Congress has made it clear it will not abide.

Oh, and the rich stepfather is still at large.

Hat tip to Dave Schuler at The Glittering Eye

A good understanding of the people and culture of Afghanistan, and the results of the Russian and American invasions, can be found in 'The Story Teller's Daughter'.