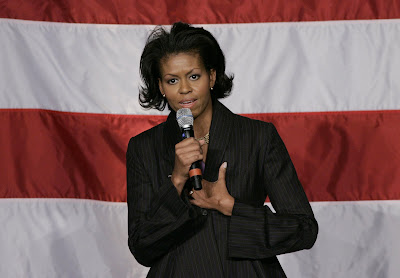 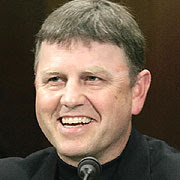 It must be the most derivative argument ever. Larry Johnson makes up . . . flat out makes up . . . an incident where Michelle Obama appeared with Louis Farrakhan and said something nasty about white people. In his telling, there's no clarity about what she is alleged to have said or in what context she might have said it. All he knows is that she used the word 'whitey' and that when we all get to see the video tape we'll be shocked for sure.

This desperate and pathetic last ditch attempt to hold the superdelegates in line succeeds in going viral just before the last two primaries. It's clearly just the kind of ratfucking job Larry was trained to carry out by the Central Intelligence Agency. Only Larry's supposed to stick to doing it in foreign countries against Soviet-leaning parties, and then only upon receiving specific orders.

This decision, on Larry's part, is the last straw as far as I am concerned, and I know the tape doesn't exist and that Larry can't produce it. So, I copy someone else's snarky comment and write it up as if it is a transcript. Instead of the tape having Michelle Obama saying "Whitey" it has her saying "Why'd he?"

If the media is going to write about the debunked "whitey" tape, particularly as a trigger for Obama's anti-smear site, there's really no excuse for not mentioning the two sources more responsible than anyone else for hyping the story: pro-Hillary blogger Larry Johnson and Democratic strategist Bob Beckel, who appeared on Fox News claiming a "mighty big shoe" was about to drop regarding Michelle Obama. . . .

The behavior of the mainstream media is sending a clear message to those of us on the right: do not ever help out the Obama campaign, even if you think the world would be well-served by debunking a ridiculous accusation, because no one will ever remember your efforts to get to the truth. Instead, you'll get blamed for spreading the malicious rumors.

McCain will be running into stiff headwinds over the next five months. Bush's approval rating hit another low in Post-ABC polling and now is 29 percent, with 68 percent saying they disapprove of the job he is doing -- 54 percent strongly. Among the dwindling number who approve of the way Bush is handling his job, 80 percent back McCain.

It's much better for all manner of political professionals to argue that elections are controlled by actions rather than events. When one party or another loses, it's because of what they did (nominated an elitist like Kerry), didn't do (go negative early enough), but not because of what was going on (economy sucked). If that's true, then politics is much more interesting. new strategies can be tried, new approaches tested, new theories offered.

But, fairly often, "what's going on" is the best explanation of what happened. This is why, in general, the political scientists I've talked to are totally confident Obama will win. Voters don't like the economy and they don't like Iraq. If Bush were running, he'd be slaughtered. The question I've not quite been able to answer is whether McCain's personal brand is so strong, and so distinct, that he'll be evaluated as an individual candidate, or whether he'll be the stand-in for the Republican Party. If the former, he may have a chance. if the latter, he's going to get crushed.

So Barack Obama tells Jake Tapper that we can fight terrorists and follow the constitution at the same time ("for example, the first attack against the World Trade Center, we were able to arrest those responsible, put them on trial"), and we get the standard talking point reaction from the McCain team. You know the drill: naive, September 10th mindset, etc. etc. All the usual dumb little campaign comments.

But wouldn't it be nice if we could have a real conversation about this? We could compare, say, the amount of terrorism we've stopped via police work, intelligence, international cooperation, financial interdiction, and so forth, and compare it to the amount of terrorism created by our military intervention in Iraq. And then we could talk about how the real September 10th mindset is the one that says it doesn't matter what other people think of us because, you know, we've got the biggest military in the world and we can squash 'em all like bugs anyway.

I say: bring 'em on. Let's talk about who's naive vs. who's learned some lessons from 9/11. The sooner the better.