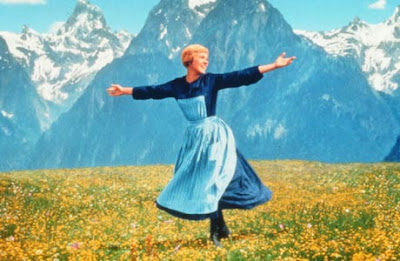 Kael wrote that The Sound of Music was "The Sound of Money"
Robert Stein has been an editor, publisher, media critic and journalism teacher, is a former chairman of the American Society of Magazine Editors and present-day blogger with a perspective, scope, sensitivity and ability to write smart and short that his peers can only envy. He's also a friend.

It was while Stein was editor of McCall's magazine that he hired and fired Pauline Kael in the course of a few turbulent months in 1966. Here is Bob's account from his yet unpublished "memwows," which is what an old gossip columnist friend called memoirs:

I brought out the worst in Pauline Kael. She started irritating me the minute we met and never stopped.

Looking for a movie reviewer with intelligence and style, I read and admired Kael’s work in periodicals with small circulation. Barbara Lawrence and I took her to lunch.

The ice in our drinks had barely melted when Kael went into a diatribe about the awfulness of mass magazines. When she paused for breath, I said, "I could tell you worse than that, but we’ve established how independent you are, so let me make a suggestion. When your friends accuse you of selling out, just admit you’re doing it for the money."

We agreed on a year’s contract.

Kael’s first column was an essay on movie critics. It could have been titled, "Is There Anyone I Haven’t Offended?" She started by describing readers as boobs who expected critics to like what they like and reviewers as venal enough to do that and went on to assail education ("academic dry rot"), art houses and film festivals (patrons are "afraid to say what they think or just don’t know what to think") and good taste (what’s new and important is "in terrible taste").

That took care of everybody but Kael and her groupies, as she savaged movies from Zorba the Greek and The Pawnbroker to the Beatles' A Hard Day’s Night.

In the following months, it got so bad that even Kael seemed aware of what she was doing, pausing during a round of demolition to observe that "a reader may easily say, 'She just doesn't like movies' and then start trying to figure out what’s the matter with me."

Dr. Zhivago, Lawrence of Arabia and Born Free went under her scalpel and did not survive. After eviscerating movies, Kael went at the people who made them with nasty comments on the taste and motives of Paul Newman, among others.

After five columns, I had enough. To complete her self-directed drama of Life Among the Philistines, Kael told reporters I did not honor her contract (I paid her for the year) and that I fired her for attacking The Sound of Music as "The Sound of Money" (actually I agreed and had told her so). Years later, when she was established at The New Yorker, Kael admitted to an interviewer that I was right on both counts.

I got some insight into what went wrong between us when she wrote about Herman Mankiewicz, a bitter man who collaborated on Citizen Kane. Very drunk at a Hollywood party, he had vomited over the dinner table. "Don’t worry," he reassured the hosts, "the white wine came up with the fish."

Kael, who shared Mankiewicz's contempt for the conventional, had to explain her firing by announcing The Sound of Music had come up with the sour grapes.