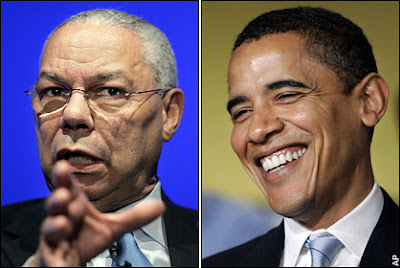 While he never would use such language, Colin Powell is said by friends to share Hunter's analysis of the GOP. His tenuous 13-year relationship with the Republican Party, following his retirement from the Army, has ended. The national security adviser for Ronald Reagan left the present administration bitter about being ushered out of the State Department a year earlier than he wanted. As an African American, friends say, Powell is sensitive to racial attacks on Obama and especially on Obama's wife, Michelle. While McCain strategists shrug off defections from Bruce Bartlett and Larry Hunter, they wince in anticipating headlines generated by Powell's expected endorsement of Obama.

Although Obama seems to be "up" in current national polls, McCain is actually doing a much better job of shaping the agenda to his advantage.

-- THEDA SKOCPOL
Long-time readers will instinctively know how I feel about the whole unity tour going on right now in Unity, NH- it makes me want to barf, as platitudes like this often do. However, for those of you, who, like me, thought that the joint Obama/Clinton appearance today was most likely going to be a kiss on the lips with no tongue, you are in for a rude awakening. Clinton and Obama are both pretty damned fired up, and seem about as united as is humanly possible with clothes on (sorry for the imagery).

-- JOHN COLE
As they begin their unity tour this week, Hillary Clinton has a powerful argument to win over diehard supporters who resist backing Barack Obama because he kept her from becoming the first woman in the Oval Office.

If John McCain is elected, they can kiss goodbye to Roe v Wade, which has been teetering in the Supreme Court balance since Bush started naming Justices and would surely be overturned in another Republican Administration.

As late as last year, McCain told Tim Russert on "Meet the Press:" "I have stated time after time after time that Roe v Wade was a bad decision . . . To me, it's an issue of human rights and human dignity."

So much for pro-choice and the illusions of Independents and disaffected Democrats that, on the overriding issue of women's rights, McCain is not Bush Redux.

-- ROBERT STEIN
The woman who wants to be the next Republican First Lady pledged today to expand her humanitarian work if she makes it into the White House, taking inspiration from the late Diana, Princess of Wales.

-- BEN MACINTYRE
[Scott] McClellan sees similarities between Bush in 2000 and Obama in 2008. The Illinois senator "has a theme that is very similar to the one this president ran on" and that initially attracted McClellan to Bush: being a bipartisan who reaches across the political gulf to act as a "uniter, not a divider" and a change agent.

McClellan who is clear that he has no great admiration for Cheney, joked to the audience that his national book tour has given him some ideas for book titles Cheney might consider: "The Lies I Told," or "I Upped Halliburton's Income - So Up Yours."

The will of the people is seldom clear cut and it is always muddy in the general election. Broad trends and a few bright take-aways can be gathered, but even then it can be re-muddied. For instance the 2006 mid-terms could be seen as a public rejection of the Bush Administration, but that has not translated into immediate policy steps. Instead we still have a supine Congress caving into the White House and the fear of fear itself. Others argued that the will of the people was to check corruption and self-dealing. The will of the people is an excellent trope, but it is much harder to dowse than a simple exhortion to follow the self-evident.

Always a pleasure to point out that Blackwater Worldwide is in the news again. Funny how they are hardly ever in the news for doing anything good. Still, there's no such thing as bad publicity, right? Even if Blackwater is caught first breaking the law, and then lying about it. Under the Bush administration, that's practically a character certificate anyway, especially for a company in Blackwater's line of business.

When [Nancy] Pelosi took impeachment off the table, impeachment was reduced to being a rhetorical protest vehicle for progressives like Dennis Kucinich or Russ Feingold. But Congress need not convict President Bush to impeach him for high crimes and misdemeanors. And arguably, the House need not even impeach the president to hold a grand inquest into the powers that he has claimed, registering a formal objection to them. The Judiciary Committee in the House should formally convene that inquest, no matter what the decision is on impeachment. For if Pelosi's sensible political judgment results, as it has to date, in a show of congressional "inertia, indifference or quiescence," the Democratic majority in Congress may have gained a dozen seats at the cost of relinquishing its own powers, and putting the rights of Americans at risk.

Most Democrats in the two houses of Congress balk at initiating impeachment proceedings against President Bush. We assume it’s because, like a woman living with a rageaholic husband, they prefer to let their Republican colleagues lie as if they were sleeping dogs.

Is there something else that Democratic senators and members of the House of Representatives are afraid of? Perhaps they fear that impeaching the president might stir up buried shame on the part of many who voted for Bush. Americans already brought down their wrath on the administration in the 2006 election, as well as in polls. Rub any shame on their part about being "low-information voters" in their face and they just might kill the messengers.