Quotes From Around Yon Econosphere 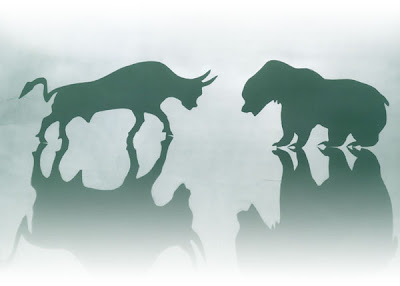 After eight brutal months on Wall Street, the Dow Jones industrial average finally made it official: Blue-chip stocks have stumbled into bear territory.

A brief 155-point slide on Friday afternoon brought the decline in the Dow to 20 percent from its October peak, an ignominious figure that is generally regarded as marking the start of a bear market. The index ended down 107 points, a mere 0.1 percent above the threshold. The broader Standard & Poor's 500-stock index has not fallen quite as much.

The eight-month journey has roughly followed the twists of the subprime mortgage crisis, with a significant drop after the Bear Stears collapse and a tantalizing rally when the economy appeared to recover slightly last month.

But in June, as the price of oil kept rising and the pain in the financial industry showed no signs of easing, the losses gained momentum. Many investors concluded that the economy was in worse shape than they had initially feared. This month, as the price of crude has gained about $13, the Dow has shed more than 1,000 points. The index closed at 11,346.51.

When the economy's gone south, the president's party always suffers in an election year. Maybe [John] McCain could benefit from focusing on the economy a little more than he has, but McCain's between a rock and a hard place here. He may just have to pick the national security hard place and stick to it.

With Americans still reeling from this week's report that gas may cost $7 a gallon in a few years and with millions either losing their homes to foreclosure or unable to sell their homes, people are looking for help.

Congress has gone on holiday and told the nation, "See you after July 4th." Nobody here but tourists, who can't understand why Congress would leave with so much undone.

"I can't really say I know what they do in there," a man from Bakersfield, Calif., said outside the Capitol building. "I know what they're not doing."

Confidence among U.S. consumers fell in the month of June to the lowest level in 28 years. The culprits are record-high energy costs and rising joblessness.

That is, until recently.

The most recent peak in sentiment was January 2007, and since then, its been more or less straight down. 2008 saw the prior range broken, to record levels of unhappiness.

What gives? This must be perplexing to those who look at inflation and unemployment data without any context. The numbers seem relatively modest.

For a moment, forget all of the arguments about models and how the BLS measures things, and how thats changed over time. If we have full employment, where is the wage pressure? If unemployment is so low, why is sentiment so negative? If inflation is contained, why the negative sentiment? Something here doesn't compute.

American consumers haven't found so much extra money in their pockets since the Ford administration. Thanks to the economic stimulus checks that went out as a recession fighter, disposable incomes jumped 5.7 percent in May.

And yet to look at investor sentiment, all remains not well.

In the average bear market, the Dow Jones Industrial Average has fallen 30 percent and sometimes much, much more. The Dow decline of 2000 through 2003 involved a loss of 55 percent, the bear of '73-'74 caused a 50 percent loss and the 1929 market wiped out a full 85 percent of the Dow's value.

We think we're still quite a ways from the bottom. Over the next year, the Dow could fall 30 percent to 50 percent from its October '07 top. The market could enjoy a few short-lived rallies during that span, like the one we experienced from March through May. But each rally is apt to result in a lower high and a lower low in the market.

Sloppy thinking by the great mathematician [Blaise Pascal] has been enshrined for decades in the undergraduate economics and statistics curriculum. You know the story: the problem of whether to believe in the Christian god and follow church teachings can be formulated as one of expected value, the cost in pleasure of being religious times the likelihood that there is no such god compared to the cost in eternal damnation times the probability that the Bearded One actually exists. The small likelihood of divine existence is outweighed by the even greater imbalance in the calue cofactor. Except that it's all wrong.