Earth To Pundits: There Is No Such Thing As A Free Lunch In The Blogosphere . . . 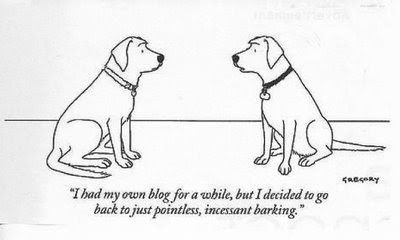 . . . Which makes calls for a boycott against The Associated Press because of its warning that using wire service content in the form of excerpts and links without payment is in violation of copyright law is misguided -- or to put it in terms that some bloggers would understand, it's plain stoopid.

I seem to be in the minority on this point of view, and there are some heavyweights like Jeff Jarvis in the majority, although Jeff later more or less came to his senses and is now proposing a link ethic between the AP and bloggers, while AP itself also has backed off.

I also happen to come by my view honestly.

That is to say that I have a pretty damned good understanding of copyright law and know a thing or three about libel, as well, after a 37-year newspaper career that included quality time spent in the offices of high-paid newspaper lawyers who were trying to extricate my paper and myself from one legal fix or another.

As it is, the blogosphere is a marvelous work in progress and legal issues such as copyright and libel are only beginning to be ironed out.

So the boycott AP crowd needs to chill and understand that reaching an accommodation with the wire service and other news organizations that get huffy about the use of their content is in their best long-term interests. And that if they insist of throwing temper tantrums they'll get squashed like bugs by the high-paid lawyers for those outfits. And probably deservedly so.

I myself try to stay out of trouble by doing one simple thing:

Always give credit where it is due to both the primary source and the blog or website through which I might have found the primary source. This is especially pertinent when it comes to use of photographs and other images without permission, and I will hold off using an image if I cannot ascertain its owner and don't believe it to be in the public domain.

That few bloggers have such standards, let alone any standards, says less about the Wild West nature of the blogosphere than the ignorance of many of the cowboys and cowgirls.

Glenn Reynolds, whose Instapundit is one of the most read one-person blogs anywhere, also teaches law at the University of Tennessee. Earlier this year he published a paper in the Washington Law Review titled "Libel in the Blogosphere: Some Preliminary Thoughts" that is a must-read for any blogger who may be hearing footsteps and is interested in more than just pointless, incessant barking.

In fact, no major libel case has emerged since the advent of the blogosphere.

Blumenthal v. Drudge, in which Sidney Blumenthal went after Matt Drudge of the Drudge Report for writing that the political journalist had beaten his wife, is the closest example because of its portentous first-amendment issues.

Drudge later retracted the report and apologized, but Blumenthal filed a $30 million libel suit. He later claimed that he was forced to drop the suit because he could not afford the cost of litigation. (Perhaps not coincidentally, Drudge also was a target of the AP’s ire in the ongoing copyright flap.)

* The exposure of bloggers is further limited because they usually blog about public figures and, as is the case with more traditional media, malice with reckless disregard for the truth would have to be proved.

* Blog culture itself frowns on libel suits. Blogging economist Donald Luskin, for example, threatened to sue then-anonymous blogger "Atrios," who has since unmasked himself. Luskin withdrew his threat under pressure from other bloggers.

But that also doesn't mean that bloggers should see themselves as an elite and don't have to bother to extend a common courtesy like giving credit where it is due.