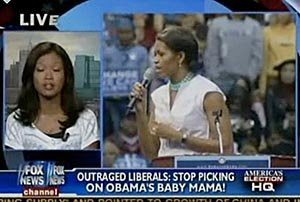 In a campaign that includes the first viable African-American presidential candidate, the lines of appropriate speech have become fuzzy. News organizations are under pressure from a broad network of self-appointed watchdogs, including organized groups like Media Matters and individuals. These watchdogs are likely to remain vigilant about gaffes, misstatements and potentially biased language through the November vote. Just this week, Gina McCauley, a well-known blogger in Austin, Texas, started michelleobamawatch.com to track the portrayal of Mrs. Obama in the news media.

In this campaign cycle, television news organizations have issued at least 10 apologies in total over on-air expressions. On Tuesday, a Fox News anchor, E.D. Hill, said she regretted suggesting that a celebratory hand gesture between Barack and Michelle Obama might be a "terrorist fist jab." On Monday, NBC News correspondent Andrea Mitchell apologized for calling southwest Virginia "redneck country."

The most-recent dust-up began Wednesday afternoon during a segment on Fox News by commentator Michelle Malkin about conservative attacks on Michelle Obama. At the bottom of the screen, a headline said, "Outraged Liberals: Stop Picking on Obama's Baby Mama!"

[W]hile the McCain campaign apparently believes that women are easy marks for its latent feminist cross-dressing, a reality check suggests that most women can instantly identify any man who’s hitting on them for selfish ends. New polls show Mr. Obama opening up a huge lead among female voters — beating Mr. McCain by 13 percentage points in the Gallup and Rasmussen polls and by 19 points in the latest Wall Street Journal-NBC News survey.

I’ve been dipping a little bit into the anti-[Jean] Sebelius waters, though, and the objection to her is somewhat more complex and interesting than simple outrage at "snubbing in favor of another woman." To choose Sebelius, I think, would seem to ratify for some of these women the longtime feminist concern that, in order to be allowed into the male world, women have to be non-threatening — gentle, motherly, not too brazen or spiky.

A strange thing is happening in the South. When Don Cazayoux and Travis Childers won their special elections in, respectively, Louisiana and Mississippi, the Republicans complained that they they ran as Republicans. This wasn't strictly true. They ran as pro-life, anti-gay marriage, anti-immigration candidates. That made them seem like Republicans. But they also ran against the war and they ran against corporate welfare, and they ran against free trade agreements. They ran on increasing federal funding on infrastructure and education, and they ran on nixing No Child Left Behind. On many issues they were fully in line with the Democratic Party, and on some they were more in line with the Progressives than the Blue Dogs.

On Tuesday there was a startling upset in the Democratic primary for South Carolina's senate seat (held by Lindsey Graham). Lawyer Michael Cone was expected to win, but he lost by a thousand votes to an unknown airline pilot named Bob Conley. The election was so close that they will do a recount. But, assuming Conley wins, we'll have another candidate that falls roughly into the Cazayoux/Childers mold. And it could spell trouble for Lindsey Graham.

Rudy Giuliani, who parlayed his 9/11 TV performance into a $100 million consulting business and six-figure fees for speeches before flopping as a presidential aspirant, is now offering to "appear at fund-raisers around the country for G.O.P. candidates. But there is a catch: He wants some cash out of the deal."

She delightfully reports that the Moonlight Bunny Ranch in Carson City, Neveda -- the legal whorehouse featured on HBO's "Cathouse" -- is offering the first 100 customers who show up with their stimulus rebate checks twice the "services" for the same price. Guys that bring in their entire $1,200 check gets a special deal: three women and a bottle of bubbly.

Now you know why it’s called a stimulus check.

For most Presidential elections of the past 100 years, Jews have voted overwhelmingly for Democrats, with the exception of the 1920 election when many Jewish women, overwhelmed by Warren Harding's goyische good looks, pulled the lever for the Republicans. But this year many Jews are asking themselves, Is Barack Obama is good for the Jews?

. . . Although Obama said all the right things about Israel in his speech to AIPAC (and, in fact, he may have gone overboard, which also makes Jews suspicious), he is going to have to do more (but not too much more). Every day, it seems, I get emails making yet another anti-Semitic charge against Obama. I can't imagine who is sending out all these emails but I'm sure they have Jewish voters' best interests at heart. Some of them do seem a bit outlandish. Now, I don't personally believe that Obama uses the blood of Jewish babies in ritual sacrifices to help him maintain his youthful appearance, but until Obama states unequivocally that he does not, many Jews will be reluctant to vote for him. That doesn't mean that they will vote for McCain, but they just might write in Pat Buchanan's name instead.