Iraq Status-Of-Forces Agreement: A Really Bad Deal No Matter How You Look At It 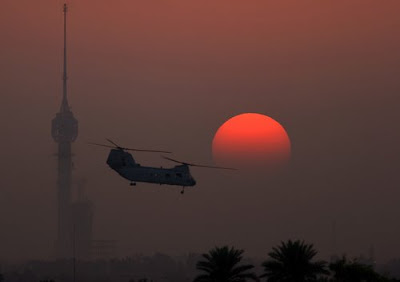 In the end, how we leave and what we leave behind will be more important than how we came.
-- AMBASSADOR RYAN CROCKER

Having royally screwed up just about everything else over the past seven-plus years, George Bush's last best hope of tying the hands of the next administration before heading back to Texas to search for his legacy among the scrub brush is a status-of-forces agreement with Iraq.

The problem for Bush is that hardly anyone likes the agreement except he and Nouri al-Maliki. This is because it is a really bad deal for everyone except the nanny president and his diapered prime minister protege. Oh, and American oil companies, too.

Under the agreement, formally known as a "Declaration of Principles for a Long-Term Relationship of Cooperation and Friendship Between the Republic of Iraq and the United States of America," Iraq would:

* Grant the U.S. long-term rights to maintain as many military bases as it wants -- 58 by some accounts, compared to the present 30 -- and where it wants them.

Allow the U.S. to conduct military strikes against Iran and any other country without the permission of the Iraqi government.

* Allow the U.S. to determine if a hostile act from another country is aggression against Iraq.

* Allow U.S. forces to arrest any Iraqi for any reason without consulting local authorities.

* Grant immunity from Iraqi law to U.S. troops and contractors.

* Give the U.S. responsibility for Iraqi armament contracts for 10 years.

And although the word oil does not appear anywhere in the agreement, there is an open secret of a quid pro quo: U.S. oil companies get first dibs at Iraq's vast untapped oil wealth and Al-Maliki gets coup insurance.

The biggest problem with the agreement from an American perspective is that it locks the U.S. into a long-term military role in a country with a cauldron conundrum: There will be unrest as long as America troops remain there and unless they hole up in their bases, American troops will continue dying.

The biggest problem with the agreement from an Iraqi perspective is that it is deeply humiliating. In one fell swoop, it neuters Iraq's national sovereignty, something of no less pride and importance to Iraqis than it is to Americans.

Why then would the Baghdad government go along with such a rotten deal?

Because the U.S. is blackmailing it to the tune of $50 billion.

That is the amount in U.S. dollars being held hostage in the Federal Reserve Bank of New York in the form of Iraqi foreign exchange reserves as a result of U.N. sanctions dating back to the first Gulf War. Some $20 billion of that amount is in outstanding court judgments.

Meanwhile, the White House considers the agreement to be an "executive accord" and refuses to submit it to Congress, as law and tradition dictate, because it would not be ratified.

Iraqi religious and political leaders are demanding that the agreement be put to a national referendum, but that will never happen because it would lose badly.

Besides which, a referendum would be oh so democratic, and the Bush administration's view of what should constitute a democracy in Iraq bears only passing resemblance to the homegrown version, which it has been doing a pretty good job of trying to tear apart as it is.

There is something to be said for U.S. Ambassador to Iraq Crocker's aphorism atop this article, and in that context the latest round of revelations concerning White House deceits in the run-up to the 2003 invasion seem like so much stale beer. I guess five years of war will do that to you.

Nevertheless, having started a wrong war in the wrong place at the wrong time that has visited untold horrors on the Iraqi people, killed a goodly number of Americans and been a sucking chest wound on our economy, the U.S. does have an obligation to sweep up the broken china before it departs. But the agreement has nothing to do with that and any comparisons with the security agreements that the U.S. has with Japan, Korea, Germany and other countries are bogus.

Got that, John McCain?

It is instructive that unlike those other agreements the U.S. doesn't have to inform the Iraqi government as to the comings and goings of its forces. The obvious reason is that Baghdad would tip Tehran. Only somewhat less obvious is that despite the formal name of the agreement, it has a whole lot less to do with "cooperation" and "friendship" than a throwback to the Ugly American imperialism of the bad old days, which like the "negotiations" over the agreement typically contained an element of blackmail.

The White House's deadline for doing the deal is said to be July 31, but it is unlikely that Al Maliki will have all of his sheiks in a row by then because of objections over the number of bases the U.S. wants and national sovereignty concerns. That means the agreement will be a campaign issue well into the fall.

Got that John McCain?