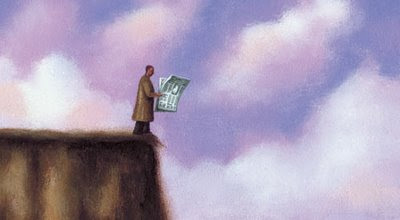 As someone who bled printers ink at newspapers for 35 years and has a second career as a blogger, the big message in former White House press secretary Scott McClellan's blockbuster of a book is not that George Bush is a resume without a man, that there was an orchestrated effort to lie to a public traumatized by the 9/11 attacks in the run-up to the Iraq war, or that Carl Rove makes Machiavelli look like a Boy Scout. It is that the mainstream news media's march toward irrelevance is well deserved.

This is a judgment that stems in large part from the news media's abrogation in covering all three of the biggest stories of the young millennium:

George Bush's historic reign of error, including his extralegal power grabs and embrace of the use of torture.

That the 9/11 terror attacks might have been prevented had the U.S. intelligence community not contentedly slept.

That the war is responsible for everything from the continuing growth of the Islamic jihad to the explosion of oil prices.

Nobody likes being called names and the thin-skinned press corps is no exception. That is why so many reporters and commentators have taken umbrage at McClellan's view that the news media was so credulous and so bought that it gobbled up the White House's pre-war propaganda like so many canapes at a Rose Garden reception.

(This kind of moots the right-wing myth of the "liberal" media, eh? And would Bush have skated to a second term if Mr. Bill Keller of The New York Times and other powerful news execs done their jobs?)

Yes, McClellan has some issues of his own, including why he didn't mind being lied to – and gave the finger to the few reporters who were skeptical – until it was time to cash in on a book.

Yes, the post-9/11 world was frighteningly unfamiliar territory, but that did not abrogate the news media's responsibility to ask tough questions about why we were so utterly unprepared for an attack on the homeland.

Yes, there have been exceptions to the news media's wretched performance, but none of the leading print and broadcast outlets have covered themselves in glory covering these three major stories.

Yes, the alternatives to the mainstream media -- notably blogs – have their own issues, including their unedited nature and the proclivity to play loose and fast with the facts.

The seeds for the news media's march toward irrelevance were sewn well before George Bush was anointed the Republican presidential nominee in 2000, and are the result of two perversely complimentary trends:

First, the consolidation of print and broadcast media ownership into a few corporations that put their share price before the quality of their product at a time when the decline of readers and viewers was well underway.

CNN reporter Jessica Yellin's confession amidst the McClellan book feeding frenzy that her former bosses at MSNBC expected her to slant war coverage to be consistent "with the patriotic fever in the country at the time" was shocking in its candor but not in its substance.

Meanwhile, media coverage of the presidential campaign is the same dreary affair that we have come to expect every four years: The candidates manipulate the media. The media obliges and manipulates back. There are recurring story lines that bear only coincidental resemblance to what's really going on. The focus is almost entirely on the horse race and passing scandal of the moment.

Second, the inability of the print and broadcast media to understand that the Internet revolution would render their ossified business models obsolete, and when that reality finally sunk in their halting attempts to develop new models.

When CBS Evening News anchor Walter Cronkite declared in 1968 that the Vietnam War was "unwinnable," the earth moved. When The Washington Post pursued the Watergate story in 1972, it took down a president.

But when The New York Times last month revealed the hidden ties between the Pentagon and anything but impartial TV news military analysts, there were widespread yawns and the broadcast enablers of this deceit simply ignored the story.

Newspapers have painted themselves into an especially tight corner.

When I came into the business in 1967 at the tender age of 20, most reporters and editors drank like fish and smoked like chimneys (on the job), lived and died for the news scoop, type was set on massive Linotype machines using molten lead, and when the presses of morning and evening newspapers rolled it was like printing money.

Today newsrooms are like vegetarian cafeterias, the scoop is most often the purview of cable news channels and more and more frequently Internet sites, the entire typesetting and printing process is electronic, and when the presses roll for the remaining morning papers (there are no evening papers as such anymore), one can only wonder how many years it will be before they are silenced.

Even as a tireless advocate of scraping the old business model, I probably would not have been able to render my judgment that the media is marching toward irrelevance if I still was on the inside looking out. The ivory tower does that to you.

But I was a buyout baby – taking an early retirement package offered by the once great Knight Ridder newspaper chain nine weeks before those aircraft were crashed into the and Pentagon by Al Qaeda operatives whose pre-9/11 activities had alarmed a small handful of CIA and FBI agents who were unable to get their somnambulant bosses' attention. It fell to independent journalists and not the mainstream media to expose this shocking back story.

The tsunami of buyouts at the New York Times, Washington Post, Los Angeles Times and other big newspapers have not bolstered their stock prices (which plummeted an average 37.7 percent in 2007) or slowed the erosion of ad revenue and readership. Yes, a bad economy has been a player, but economic ups and downs have been an aspect of the business since John Peter Zenger published the New York Weekly Journal in the early 18th century, so the economy is a lame and self-serving excuse.

Buyouts not only have not had the result the bean counters wanted, they have cheapened these brands as the most experienced reporters and editors move on. Not necessarily always the best, mind you, but does anyone believe the WaPo will be better without Thomas Ricks, hands down the best military affairs reporter at an American newspaper? Will the heart and soul of these newspapers have to be destroyed in order to save them?

Not long ago, I cared deeply about such questions. And I acknowledge that my doom-and-gloom scenario is tempered by the reality that newspapers, especially in smaller communities, will continue to be vital sources of information. How else to find out what the school lunch menus are?

But newspapers in general will continue to lose their standing as the most important sources of information and opinion, and the place and power of the Fourth Estate will become archaic as those Linotype machines. The television news media will not be far behind.

Image from The Economist

Posted by Shaun Mullen at 1:32 AM
Email ThisBlogThis!Share to TwitterShare to FacebookShare to Pinterest

Isn't there NPR reporting and interviews showing that some McClatchey journalists were calling all the right stuff and being ignored. I'm sure I saw a good program to this effect.

Yes. At the top of the very short list of reporters who did not drink the Kool Aid are those from McClatchey and the late lamented Knight Ridder. NPR's record is mixed.