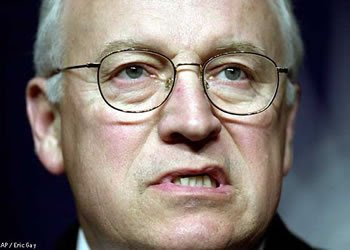 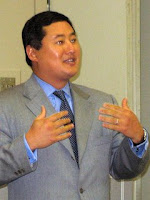 It is now well known that when the White House needed justification for its endorsement of Nazi-like torture techniques, it turned to John Yoo.

The young attorney in the Justice Department's Office of Legal Counsel wrote a series of memos that he believed gave the Bush administration the legal fig leaf it needed to use torture and deny enemy combatants protection under the Geneva Conventions.

Yoo (left) was a foot soldier in a national tragedy starring Vice President Cheney, Attorney General John Ashcroft and his successor, Alberto Gonzalez, Secretary of State Colin Powell and his successor, Condoleeza Rice, and CIA Director George Tenet. And, of course, The Decider himself.

The administration's embrace of torture is the most atrocious aspect of a presidency that has determinedly turned the separation of powers, due process and the Rule of Law on its collective ear.

All in service of the specious claim that the president should have unlimited powers in the post-9/11 world even if it means defecating on the very constitutionally enshrined rights that we are fighting the so-called Global War on Terror to protect.

Public reaction to this dark interlude has been underwhelming.

This is because news coverage has sucked -- and can you imagine it being any other way considering the spectacle of last night's presidential "debate"? I also suspect many people are okay with torture so long as it isn't their son or daughter who is being waterboarded.

Meanwhile, there has been loud flailing by those who want to punish Yoo now.

I want to punish Yoo, too, but the movement led by the so-called American Freedom Campaign to force him from his position as a faculty member at the Boalt Hall School of Law at UC Berkeley, is not the way to go.

* An argument can be made, although it is a weak one, that even Yoo's shoddy legal work and morally reprehensible views do not constitute grounds for dismissal of a tenured law professor.

* More importantly, we need to cut to the chase after President Bush heads back to his Texas ranch in January to search among the scrub brush for his squandered legacy, and here Barack Obama has the right idea.

Obama, like me, has opposed impeachment as a practical impossibility and enormous distraction, so as far as I'm concerned these folks need to buzz off.

But Obama tells my friend Will Bunch that he is open to the possibility of investigating potential high crimes in the Bush White House.

This is what Obama told Will, who along with Andrew Sullivan has been one of the too few voices speaking out persistently against torture in the blogosphere:

"What I would want to do is to have my Justice Department and my Attorney General immediately review the information that's already there and to find out are there inquiries that need to be pursued. I can't prejudge that because we don't have access to all the material right now. I think that you are right, if crimes have been committed, they should be investigated. You're also right that I would not want my first term consumed by what was perceived on the part of Republicans as a partisan witch hunt because I think we've got too many problems we've got to solve."

Obama's approach will not sit well with the baying dogs of the liberal-left wing, because he seems determined to first answer the all-important question of whether there were real crimes as opposed to really bad policies:

"I think it's important-- one of the things we've got to figure out in our political culture generally is distinguishing betyween really dumb policies and policies that rise to the level of criminal activity. You know, I often get questions about impeachment at town hall meetings and I've said that is not something I think would be fruitful to pursue because I think that impeachment is something that should be reserved for exceptional circumstances. Now, if I found out that there were high officials who knowingly, consciously broke existing laws, engaged in coverups of those crimes with knowledge forefront, then I think a basic principle of our Constitution is nobody above the law -- and I think that's roughly how I would look at it."

The bottom line is very simple: Bush and his cronies believed that they were above the law. It is the law itself that must be used if they are to be brought to justice.

WHAT YOU CAN DO
As Tristero recommends, build grassroots understanding that torture is profoundly immoral and makes America less safe.

If you're a churchgoer, and torture has not come up in sermons or discussions, do something about that.

And while I do not typically wear my conscience on my sleeve -- or lapel -- ordering up a few of these babies and handing them out seems like a good idea.
Posted by Shaun Mullen at 5:37 AM
Email ThisBlogThis!Share to TwitterShare to FacebookShare to Pinterest