Further Proof of the Success of the Surge 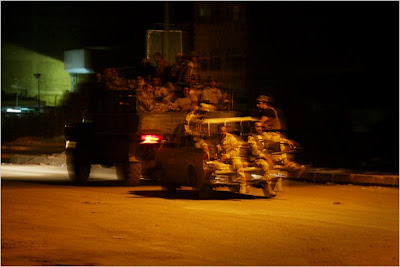 How many more Americans will have to die before the folly of the Iraq war collapses in on itself?

Hundreds? Thousands? (Some 25 have died this month alone, a return to pre-Surge levels.)

Proving yet again that the Baghdad government is unwilling and unable to take advantage of the opening that the military phase of the Surge strategy provided, there has been another round of Iraqi army desertions during a crucial battle, this time in the Sadr City slum district of Baghdad.

"The retreat left a crucial stretch of road on the front lines undefended for hours and led to a tense series of exchanges between American soldiers and about 50 Iraqi troops who were fleeing.

"Capt. Logan Veath, a company commander in the 25th Infantry Division, pleaded with the Iraqi major who was leading his troops away from the Sadr City fight, urging him to return to the front.

" 'If you turn around and go back up the street those soldiers will follow you,' Captain Veath said. 'If you tuck tail and cowardly run away they will follow up that way, too.'

"Captain Veath's pleas failed, and senior American and Iraqi commanders mounted an urgent effort to regain the lost ground. An elite Iraqi unit was rushed in and with the support of the Americans began to fight its way north.

"This episode was a blow to the American effort to push the Iraqis into the lead in the struggle to wrest control of parts of Sadr City from the Mahdi Army militia and what Americans and Iraqis say are Iranian-backed groups."

Photograph by Joao Silva for The New York Times
Posted by Shaun Mullen at 5:48 AM
Email ThisBlogThis!Share to TwitterShare to FacebookShare to Pinterest