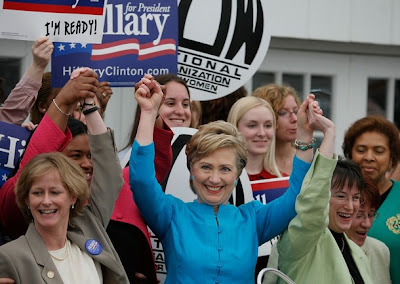 One of the more maddening threads of the Democratic presidential campaign concerns Hillary Clinton’s feminist credentials: Has she done enough for women? Can successes such as her Pennsylvania primary win be considered victories for feminists? Is she in fact a feminist? And so on and so forth.

I have hesitated riffing on this because along with writing about anything to do with (which I will do at length as its 60th anniversary approaches) feminism is a third-rail in blogging, and all the more so when the blogger is a guy.

My own situation is further complicated because my view of what constitutes a feminist has changed.

There was a time when I would claim to be a feminist. After all, I have been respectful of a woman's reproductive rights, have shared in being responsible for birth control in relationships, abhor sexual harassment and domestic violence, believe in equal pay and went out of my way as a newspaper editor to find, hire and promote qualified women in that male-dominated business.

All that said, I don't consider myself a feminist anymore. Nor do I consider myself to not be a feminist. I have come to believe that the label has become conveniently elastic and is used far too often as a cudgel in drawing battle lines.

But if you consider yourself to be a feminist, does Hillary Clinton fit as someone who:

* Supported an unprovoked war that has killed and maimed hundreds of thousands of women and children until it became politically unpopular to do so.

* Would kill millions more by nuking .

Not merely put up with but defended a spouse who was a serial philanderer.

Is running for president because of that husband and not despite him.

* Has men in most all of her key campaign staff positions.

Uses campaign tactics that Lucrezia Borgia would approve of.

Whines on cue about being treated differently because she is a woman.

For the sake of argument, I'll concede that is a feminist, but she is of that generation of feminists whom a friend calls feminazis because of their orthodoxy.

This crowd includes the sob sisters at the New York state chapter of the National Organization for Women who excoriated Senator Ted Kennedy for "abandoning" Clinton because he was another "progressive white man who can't or won't handle the prospect of a woman president" and therefore endorsed Barack Obama.

No, my biggest problem with Clinton as a feminist is one that I share with Goldy's Sister at horsesass.org:

"I don’t actually fault Hillary, because as all successful feminists of her generation who struggled to break the glass ceiling—and isn't this the ultimate glass ceiling—she has absolutely mastered the rules of a man's world. Unfortunately, the game is changing, and the old rules are no longer good enough. I wanted the first woman president to be better than the men who preceded her and not simply to be better at their politics. I wanted Hillary to rise above the fray, to inspire and to unite, and to humanize, and to finally be the one to change both how we campaigned and how we governed. While I owe Hillary a great debt for paving the way for the next generation of women politicians, I believe that our first woman president will not come from her generation. The price she and her peers had to pay for playing by the rules, as they existed, was too high. The first generation feminists didn't realize that woman shouldn't simply strive to succeed at the old rules, but they needed to change the rules themselves."

Right on, sister. Right on.


UNBELIEVABLE
Meanwhile, John McMaverick is opposed to equal pay legislation because (sigh) he claims that it would encourage lawsuits and is an example of government meddling in private enterprise when it ought to mind its own business.

Another great example of the perversely convoluted thinking we came to know and love during the long Republican hegemony in Washington.

Except for the "feminazi" crack, which was thought up by Rush Limbaugh, this aging feminist agrees with your post on feminism. I think the difficulties posed to "transitional women," which is what the late Jessica Savitch called herself, is one reason why there's so much resentment of Obama. It's sort of a "when did our moment come and go"? But it's really sad for women to think that this is our only chance and she's the best woman candidate. So Hillary loses. That doesn't mean there won't be other, better women candidates.