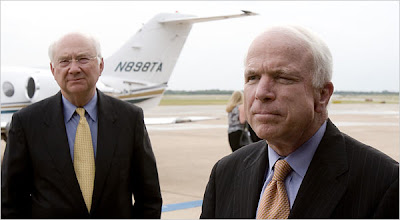 There is a ticking time bomb in the John McCain campaign and the sooner that Barack Obama can turn his full attention to exploiting it the bigger and consequential the explosion should be for this phony maverick.

The presumptive Republican nominee supposedly swore off lobbyists after the Keating Five scandal nearly destroyed his political career, but they continue to have him by the short and curlies.

Phil Gramm, who is co-chair of McCain's campaign, is not just another lobbyist. He is the man most responsible for the repeal of Depression-era banking regulations that have led directly and inextricably to much of today's economic turmoil, and parlayed that classic example of legislative legerdemain into a lucrative lobbying career for the very people who scratched the smug Texan's back -- as well as McCain's -- on Capitol Hill.

Gramm was the biggest of the big guns behind the 1999 repeal of the banking regulations -- the Gramm-Leach-Bliley Act -- which was officially called The Financial Services Modernization Act. (Don't you just love the name!)

Passage of the law was greased with an astonishing $300 million in lobbying money, and it encountered little opposition other than from those old-fashioned banks that actually insure your deposits, while receiving the enthusiastic blessing of the Bill and Hillary Clinton co-presidency. And you had better believe that the so hands-on First Lady was all for it.

One of many consequences of the repeal was that a year later the Swiss bank UBS gobbled up brokerage house Paine Weber. A year after that, Gramm settled in as a vice chairman of UBS's new investment banking arm and has since energetically lobbied Congress, the Federal Reserve and the Treasury Department on banking and mortgage issues.

This has included rolling back state rules that sought to stem the rise of predatory tactics used by lenders and brokers that led directly to the subprime mortrage meltdown, which cost USB more than $19 billion in writedowns this week and the prospect of massive job cuts.

McCain and Gramm go way back.

In 1992, the two worked closely as senators to defeat Hillary Clinton's 1993 health care plan, and in 1996 McCain was national chairman of Gramm's unsuccessful presidential run.

In 2002, as the full extent of the Enron scandal was emerging, The New York Times called Gramm "a demon for deregulation" as one of the chief engineers of the stealthy approval of a bill that exempted energy commodity trading from government regulation and public disclosure.

Meanwhile, Gramm's wife Wendy was paid over $1 million in salary, stock options, dividends and other goodies from 1993 to 2001 as an Enron board member, but of course was deaf, dumb and blind to the energy company's rampant cooking its books with the acquiescence of the late unlamented Arthur Andersen accounting company.

The result was economic ruin for thousands of families.

We can be certain that even more wrack and ruin will be in the offing with a McCain presidency. This includes more of the Rich Come First economic voodoo that the Bush administration has visited upon Main Street while Wall Street investment banks got fat and happy until their greed bit them in their collective ass and they had to come begging for taxpayer bailouts. Which of course they are getting, no (serious) questions asked.

Considering the pain and suffering that Gramm's masterwork has caused ordinary Americans, it is not hyperbolic to say that he is a terrorist, he just doesn't wear funny looking headgear and carry a Kalashikov.

McCain acknowledges that he's "no expert" and "doesn't understand" the economy. That is worrisome enough, but that he is relying on a terrorist in pinstripes to figure things out for him is . . . well, terrifying.

If America doesn't correct course from looting and privatization through deregulation Chinese, not Spanish, will become our second language.

You sort of contradict yourself on the relationship between McCain and Gramm. It's not exactly sow and trough. These guys are top politicians that have been working together for years.

You are, however, exactly right about the deregulation mania. Sounds like a good idea, but oh my goodness. It represents very dangerous practice without the benefit of a parachute. The big problem is the lure of irrational exuberance. When the market goes up, everybody wants in and they think they'll be the ones who can keep their heads and guess right on the best time to jump out. Unfortunately, bubbles are contagious and infect everyone. When they pop, there's no time to jump. Regulation represents a small effort to keep the bubbles confined to smaller compartments. Complex interlinking may be hard to regulate, but we've got to try a little harder. Republicans are congenitally unable to see the problem -- which doesn't necessarily mean that they're all evil, dishonest and stupid. It means that they are subject to groupthink, just like the Democrats but on different subjects.

The dishonesty was supplied by the lenders themselves, not the politicians, and it was retail dishonesty. The borrowers are not innocent either. A lot of people were prevaricating promiscuously with their applications, thinking perhaps, that they couldn't lose when the housing prices kept going up.

As for Paine-Webber-UBS, I'm not sure who the losers were. Finance is a very efficient industry, and the US seems to be very good at it. I have been wondering lately, though, why so many new bank offices are opening up. It seems they just closed them down. Any ideas on that?

Here's a tie-in on Clinton you may not have known. After the Gramm-Leach-Bliley Act was passed in 1999 and signed into law by then President Clinton, one of the first speeches Clinton made a lot of money on was the UBS conference. UBS as well as other financial institutions got the deregulations they wanted in the Act. Now UBS and others are facing $Billions in write-downs from the unregualted Sub Prime problem. But they paid off Bill Clinton for his support for the Bill at the time.

I came across this when I was doing a search of President Clinton speeches as I wanted to see who paid him all that money when he left office. Sorry I still don't have the link to the article.