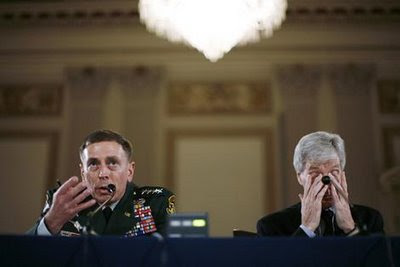 We are no longer staring into the abyss of defeat, and we can now look ahead to the genuine prospect of success. -- JOHN McCAIN

It's semi-annual progress report time for David Petraeus and Ryan Crocker. But, alas, there has been no progress beyond a return to 2005 death-toll levels, which merely has given Prime Minister Nouri Al-Maliki an opportunity to try to exterminate his chief political rivals, so the general and the ambassador desperately need a carrot or a bogeyman to appease the few restive senators and representatives among the fawning congressfolk to whom they will report.

You may recall that the duo dangled a carrot when they last checked in back in September.

While they both equivocated about whether the Al-Maliki government was making progress (of course it wasn't), Petraeus was able to say that the number of troops in country might return to the 130,000 pre-Surge level by this summer.

Well, events on the ground, notably Al-Maliki's recalcitrance, and statements from President Bush have effectively swept that wee glimmer of hope off the table, so Petraeus and Crocker need a bogeyman.

Neocon lapdog Sarah Baxter, with an assist from Marie Colvin, provides a sneak peek in a Times of London story asserting that Iranian forces were directly involved in fighting against Al-Maliki's army and security police in the siege of .

Baxter-Colvin offer no evidence for this claim and that is because it almost certainly is untrue.

What is true is that very inconveniently for the Bush administration, doesn't have just one dog in this race – commonly cited as anti-American radical Shiite cleric Moqtada Al-Sadr and his Mahdi Army by pro-war breast beaters – but has all of the dogs, including Al-Maliki's own Badr Brigade.

It was not for nothing that after the Al-Maliki offensive against the Mahdi gunmen in Basra came a cropper that the action moved to the Irani holy city of where Brigadier General Qasim Sulaymani, leader of the Qods brigade of the Revolutionary Guard, brokered a truce.

Expect Tehran to continue to give U.S. policymakers fits. Why now they're even saying that they back Al-Maliki's crackdown on Al-Sadr's milita.


I don't expect this messy reality to be a problem for Petraeus and Crocker because just as John McCain keeps getting Shuittes and Sinnis confused, most congressfolk care little of the complicated relationship that Iran has with various Iraqi factions because all they have read is Iran For Idiots. This White House-produced tutorial portrays Tehran as the bogeyman for all bad things in the region, and it is that meme that will be regurgitated over and over at the progress report hearings.

Indeed, the White House needs a bogeyman more than ever since there has been a sharp uptick in violence, as well as U.S. military deaths, in March. And the fact of the matter is taking out Sadr's posse, if making progress was as simple as that, would be a gargantuan task that would making bringing Al Qaeda in Iraq to heel seem like child's play.

An inconveniently timed new assessment of U.S. policy in Iraq concludes that political progress is "so slow, halting and superficial" and political fragmentation "so pronounced" that the U.S. is no closer to being able to leave Iraq than it was a year ago.

This assessment was drawn up by some of the same folks who advised the Iraq Study Group, that late lamented exercise in futility, and like the study group the assessors are a half bubble off: Their thing is figuring out how the U.S. can get out of Iraq while the White House's thing is to keep it there.

The Administration was unable to show WMD because they couldn't find them. They did show a handful of old stuff that probably was non-functional, but they didn't make a big deal about it. It wasn't for lack of trying, but you'll remember that they did not try to fabricate stuff.

Petraeus, however, has been displaying lots of weapons, EFP's and stuff, clearly made in Iran. We have serial numbers from missiles. Iran has been behind a lot of our troubles in Iraq, and probably blew up the Golden Mosque in Samara -- anything to cause chaos. I thought you had been reading Bill Roggio.

But you know, it doesn't really matter anymore because we're beating them back. Actually, it's mostly the Iraqis themselves that are doing the job. What you don't realize is that everybody in our government is understating the level of our success. There are at least two reasons for that. First, they have been embarrassed before by surprise escalations, particularly those orchestrated by ex-Baathists and Iran. I don't know where the next embarrassment would come from. Maybe Russia? Not likely I think. Secondly, the Republicans want to orchestrate the revelation of these facts so that it enhances McCain's election chances.