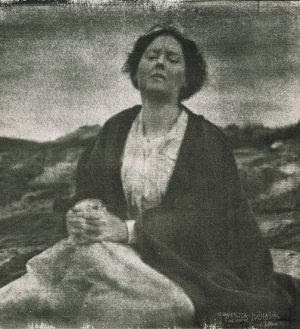 Gertrude Käsebier was not a legend in her own time. In fact, this pioneering American photographer was barely known then and is hardly known now.

Käsebier (née ) (1852-1934) was studying painting in her late thirties when se shifted her interest to photography and against the conventions of the time, went to work to support her ill husband by opening a studio despite having a minimum professional training.

She was a founding member of the Photo-Secession movement, which sought to force the art world to recognize photography "as a distinctive medium of individual expression." Other movement members were Alvin Langdon Coburn, Clarence Hudson White and Alfred Stieglitz, who printed several of Käsebier's photographs in the first issue of his magazine Camera Work.

Käsebier let her subjects fill most of the frame. She used relaxed poses in natural light, emphasizing the play of light and dark, and was able to produce images with a painting-like quality because of her printing process.

Photographs: Kasebier (left) and "The Heritage of Motherhood"
(ca. 1904), George Eastman House
Posted by Shaun Mullen at 5:05 AM
Email ThisBlogThis!Share to TwitterShare to FacebookShare to Pinterest