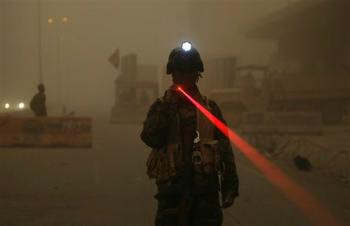 [T]he real questions in play here are about strategy rather than about the details of Iranian involvement in Iraq. Suppose the Iranians somehow managed to conquer Canada. In the wake of this conquest, a chaotic situation existed with various Canadian groups opposing the Iranian occupation to different degrees, but also adhering to different visions of the Canadian future. And suppose some Iranian military officials came to the view that some Canadian factions who were fighting the Iranians were receiving substantial material support from a neighboring U.S. government which feared that the real Iranian interest in "stabilizing" Canada was to use it as a beachhead for anti-American activities throughout the Western Hemisphere.

The issue facing Iran in this context isn't, fundamentally, a factual question about the actual scope of American interference with their operation in Canada. It's a question about what they're trying to achieve and what costs they think are reasonable to run. Iranians convinced that Iran is already locked in a remorseless struggle with the U.S.A. will, of course, take the view that they need to stand their ground and fight us. Others will caution, however, that it's exceedingly unlikely that U.S.-Iranian war will make Iran better off -- the United States isn't in a position where indifference to the outcome in Canada in a realistic option, and fighting the United States will expose an awful lot of Iranians to risk of being blown up by the U.S. military's unparalleled abilities of power projections.

Clearly, the real world doesn't precisely parallel that story. But I think it does highlight the structure of the decisions we face.

While most TV news organizations have refused to report or even comment on the bombshell Times article exposing a secret Pentagon propaganda campaign to sell policy, PBS just aired an important segment on the controversy. PBS' Judy Woodruff kicked off the debate with a disturbing summary of the current media blackout:

"And for the record, we invited Fox News, CNN, MSNBC, CBS, ABC and NBC to participate, but they declined our offer or did not respond."

As Frederick Kagan spins Neo-Con daydreams of "turning a corner," McClatchy reporters on the ground are telling a different story:

"One of the most powerful men in isn't an Iraqi government official, a militia leader, a senior cleric or a top military commander or diplomat. He's an Iranian general, and at times he's more influential than all of them."

The McCain campaign doesn’t seem especially concerned about Democratic attacks that he’s running to give the nation a third Bush term. He doesn’t seem to care when people highlight his age. He shrugs off questions about his reputation as a hothead with a nasty temperament who flies off the handle on a regular basis. He couldn’t care less when he’s caught flip-flopping, abandoning long-held principles, or getting confused about the basics of public policy.

But bring up his line about leaving troops in Iraq for 100 years, and McCain goes completely apoplectic. It seems to be the one point of criticism that McCain and his campaign fear most.

When Specialist Jeremy Hall held a meeting last July for atheists and freethinkers at Camp Speicher in Iraq, he was excited, he said, to see an officer attending.

But minutes into the talk, the officer, Maj. Freddy J. Welborn, began to berate Specialist Hall and another soldier about atheism, Specialist Hall wrote in a sworn statement. “People like you are not holding up the Constitution and are going against what the founding fathers, who were Christians, wanted for America!” Major Welborn said, according to the statement.

Major Welborn told the soldiers he might bar them from re-enlistment and bring charges against them, according to the statement.

In many ways, [Ahmad] Chalabi resembles William Randolph Hearst, a master at ramping up as a mortal threat to at the end of the 19th century. Hearst’s power, however, exploded from the barrel of his ubiquitous newspapers, while Chalabi had only his own wits.

With those wits, this improbable chunky, merry-eyed dynamo tirelessly connived and schemed on behalf of two dreams: for American military might to drive Saddam Hussein from power and to install himself in the dictator’s place. His allies needed little motivation to oust Hussein; Dick Cheney, Paul Wolfowitz and many others already regarded him as Public Enemy No. 1. But they welcomed Chalabi’s ammunition, his "“information," in the fight against war skeptics — though they didn't welcome him enough to implant him as ’s new boss.

Obama says he'll vote to confirm Petraeus, and then by implication, order Petraeus to dismantle everything he's done so far. This makes sense in politics. Vote for the popular commander to bask in his celebrity glory and having done that, see to your political base.

I know people care about the iWar. But not enough, given the circumstances. Not even close. Agree or disagree with the war, I don't care - just give a fuck. Be able to find Basra on a map, know that the Tigris isn't some sort of unholy crossbreed found at the San Diego Zoo, try to figure out the difference between a Sunni and a Shi'a even if it conplexes and perfuses your mind beyond repair. I wish I could issue some loud, righteous proclamation here about the repercussions of such continued resounding American apathy, but who are we kidding? The warrior caste is simply too small nowadays, and too proud. There will be no reckoning for all of this. We'll fight the fights not because we necessarily want to, but because no one else will. We were bred to protect. Even if we're protecting nothing more than an isolationistic yawn prefacing the continental slumber history demands occur after protracted warfare.