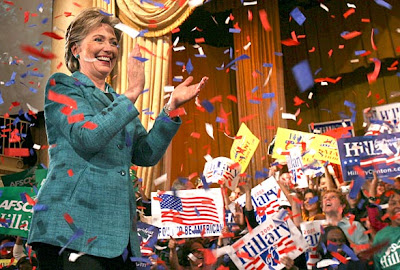 In this strangest of campaign seasons, has stood out for how much and how little has changed in the most ferociously fought and one of the most expensive primary campaigns ever. And when the fat lady finally sang, it turned out to be pretty much meaningless except in one important respect.

Hillary Clinton's 9.38 percentage point win over Barack Obama is impressive any way you cut it except where it matters most: It merely forestalls the inevitability of Obama's nomination. As for that one important respect: Exit polls again showed that there are racial, economic and values divisions within the Democratic Party that may be major vulnerabilities for Obama when he takes on presumptive Republican nominee John McCain in the fall campaign.

The candidates had six weeks to get their messages out to Keystone State Democrats, which was an eternity considering that there had been 44 primaries and caucuses in the 15 weeks before yesterday's vote, and they turned out in record numbers with over 2.3 million ballots cast.

At the outset of this six-week slugfest, was favored by about 20 percentage points in most polls. The conventional wisdom had it that was tailor-made for her with large blue-collar, union, elderly and Catholic populations, besides which she had won other big states like California, Texas and Ohio, albeit by less than impressive margins. Pennsylvania was, but her lead had shrunk to about 5 percentage points in most polls, Obama actually led in one and I had predicted that he would prevail.

As has been proven time and again this year, negative campaigning with its many tentacles – including TV advertising, debate rejoinders, push polling, sending out surrogates to sling mud, and so on – just did not appeal to Pennsylvania voters. The Clinton campaign's determined effort to take the low road and risk blurring its message on the real issues with repeated attacks on Obama did not work and diminished her credibility even though that six-week period included Obama dust-ups such as Wright-gate, Bowling-gate, Bitter-gate, Ayers-gate, Waffle-gate and Debate-gate, the latter the ABC News production choreographed by the Marquis de Sade in which the Illinois senator was repeatedly put on the defensive and was ineffectual at striking back.

All of these kerfuffles were variously described as near-death experiences by Clinton's supporters and chortling right-of-center commentators. But while they may have played in the decision of a majority of undecided Pennsylvania voters to go with Clinton -- as much as 11 percent of the primary electorate made up their minds at the last minute with 6 out of 10 going with Clinton, according to some polls -- Obama's lead over her has grown nationally.

s ability to burnish her reputation as a dirty player has been the singular success of a campaign that was supposed to be a dress rehearsal for her coronation as the nominee and then president.

She has all but forced Obama to alter his game plan and also take off the gloves. He too went on the attack in the waning days of the Pennsylvania campaign and while issues-oriented voters will be the worse for it, expect that to continue until Clintoon finally concedes.

Her favorable-unfavorable ratings in the Washington Post-ABC News poll after the primary in New Hampshire were a respectable 59-39, but there had been a dramatic 40-point swing by the eve of the vote and her ratings are now a dismal 39-58, which puts her within hailing distance of George Bush's historically high disapproval numbers. In this respect Clinton is indeed presidential.

She could not have done that by her self, of course.

When historians pick through the wreckage of the Clinton campaign, many will note that the turning point – the moment when the wheels started to come off the Trash Talk Express -- was in the run-up to the South Carolina primary on January 19. That was when Bill Clinton and other race-baiting surrogates unleashed a backlash that reverberated beyond that state, offering a stark contrast between the campaigns of a Washington insider and a fresh-faced outsider.

I wondered for weeks why the Missus had been unable to make adjustments after that debacle, including muzzling the Mister.

But after watching Hillary Clinton in action in , the answer is obvious. She has proven that she's not merely scrappy, she's just not a particularly nice person. It has finally dawned of me that she had no intention of cleaning up her act after South Carolina, and Bill Clinton merrily continued to throw logs onto the race fire even after the polls had opened.

There are a couple of reasons why there have been no adjustments:

* Bill has played loose and fast with the facts so that Hillary doesn't have to, or at least not as much. True to form, she dodged questions yesterday about her view of her husband's continued race baiting as if they were of no relevance. Incredible.

* While Obama is flush with cash and spent the lion's share of the estimated $20 million expended in Pennsylvania, Clinton is broke and can barely afford TV advertising. But when she and the man with whom she was co-president attack Obama, the news media advertises for her for free.


The upshot was that likely voters said in poll after poll that they had a much better idea of what Obama stood for and, most importantly, what he would do if elected to stanch the hemorrhaging of Pennsylvania jobs (200,000 since 2000) and beefing up job-training programs.

So why was Pennsylvania pretty much meaningless? Because Clinton has run out of road, as well as money.

Clinton technically did not get a double-digit win, although she came close at 9.38 percent. She closed the gap only slightly in the aggregate national popular vote (a 193,000 vote pickup) and gained only 13 delegates (getting 82 delegates to Obama's 69).

Then there are the remaining primaries, with Indiana and North Carolina looming large two weeks hence.

Clinton would have to win both by substantial margins to begin to close the delegate and popular vote gap, but she trails badly in North Carolina and may well lose in Indiana, too.

That presumably -- and mercifully -- would bring and end to a bloody campaign in which Clinton repeatedly sought the low ground and has all but forced Obama to do the same.

Then there is the long term: Obama lost two suburban Philadelphia counties that he probably should have won. He lost both white men and women, union members and non-college educated. He lost elderly voters and, yes, those "bitter" small-town and rural residents.

All are be huge vulnerabilities against McCain because Pennsylvania will be very much a battleground state in November. But even with Clinton's win that showdown -- and hopefully a break from the smear tactics and polarization that she has made the centerpiece of her campaign -- is drawing ever nearer.

Posted by Shaun Mullen at 6:35 AM
Email ThisBlogThis!Share to TwitterShare to FacebookShare to Pinterest

I was frankly heartbroken at the almost ten point stretch leading Hillary to her victory in PA. This morning I feel better. After all Obama can go on to NC and Indiana and campaigning there, score a knock out punch. I still fail to understand how people can find any real sincerety in Clinton. She seems such an empty pantsuit to me - filled with greed and hungry for power.

Hey, it is what it is. All these politicians have feet of clay. You are getting upset about Hillary thrashing Obama because you have bought into the Obama-as-savior mystique.

She won 59 of 67 counties. Is Indiana all that different from the counties she won? There is an Indiana in Pennsylvania, but no Philadelphia in Indiana. There may be a State College, though. You're probably right about NC, but O still has a chance to blow that with another "bitter" speech.

Obama started out as the candidate of everyone. Now he is a favorite son candidate for African Americans and Harvard, with a bit of Berkeley thrown in. Clinton started out as a feminist candidate and has become the working class candidate with broad appeal in spite of her poor campaigning and painful oratory. Note also that Obama lost the Jewish vote, which is why Montgomery County fell out of his orbit. That's got something to do with his Middle East positions.

People who know Hillary personally tend to like her from what I have heard. People who run against her tend not. C'est la guerre.