It's the Superdelegates, Stupid 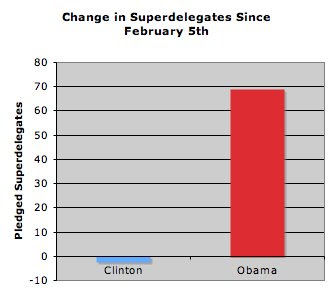 Short of it being revealed that Barack Obama has a secret family in Idaho, as one pundit puts it, Hillary Clinton's best and probably last hope of wresting the nomination from him is in a mass migration of superdelegates to her.

This chart shows in stark relief the utterly lopsided state of the game since February 5.

"Almost nobody contends that has a chance to overcome Obama's lead in pledged delegates. The spin now is that Obama's delegate lead is "small but almost insurmountable" (USA Today) and that, since neither can clinch the nomination with pledged delegates alone, "the nomination is expected to be in the superdelegates' hands" (Los Angeles Times). These beliefs reflect the mathematical illiteracy that has allowed the press corps to be routinely duped by economic flim-flammery. A lead that's insurmountable is, by definition, not small. The very primary rules that make it impossible for Clinton to catch up -- proportionate distribution of delegates that award tiny net sums to the winner -- are exactly what made Obama's lead so impressive."

Chart courtesy of Ezra Klein
Posted by Shaun Mullen at 5:12 AM
Email ThisBlogThis!Share to TwitterShare to FacebookShare to Pinterest