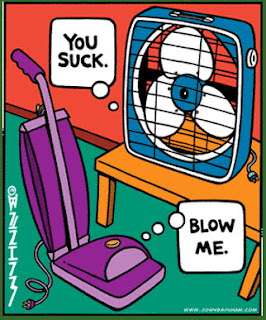 Hillary's campaign now seems to boil down to her playing the role of Lucy, with little more than catcalls that Obama "can not close the deal." "Sure," she seems to say, "he has kicked my ass in every measurable metric this campaign, but why, oh why can he just not finish me off? Clearly that means you should make me the nominee."

Regardless, Hillary's vanity campaign will continue on, trailing in delegates, trailing in the popular vote, trailing in enthusiasm and money, but not lacking in the firm resolve that only Hillary can save us all from our selves. I can not tell you how much I am looking forward to more Clintonian triangulation and McCain worship and plans to nuke Iran over the next two weeks as we wait for the super-delegates and the voters of North Carolina and Indiana to break out the wreath of garlic and wooden stakes so we can finally be rid of this menace.

The Obama campaign has ruled out going after on '90s-era controversies, such as Whitewater and cattle futures.

The Pennsylvania campaign, which produced yet another inconclusive result on Tuesday, was even meaner, more vacuous, more desperate, and more filled with pandering than the mean, vacuous, desperate, pander-filled contests that preceded it.

Voters are getting tired of it; it is demeaning the political process; and it does not work. It is past time for Senator Hillary Rodham Clinton to acknowledge that the negativity, for which she is mostly responsible, does nothing but harm to her, her opponent, her party and the 2008 election.

If nothing else, self interest should push her in that direction. Mrs. Clinton did not get the big win in Pennsylvania that she needed to challenge the calculus of the Democratic race. It is true that Senator Barack Obama outspent her 2-to-1. But Mrs. Clinton and her advisers should mainly blame themselves, because, as the political operatives say, they went heavily negative and ended up squandering a good part of what was once a 20-point lead.

Even Mrs. Clinton's supporters acknowledge that it would require some enormous shift in the dynamics of the campaign for Mrs. Clinton to ultimately win the nomination; but this at least would give her a few more weeks for lightning to strike.

I don't think the Democrats dare nominate Hillary now that it is a certainty that Obama will win the pledged delegate race. But it is still six weeks to the end of the primary season and Obama seems to be averaging a gaffe every couple of weeks. Perhaps he will really stick his foot in it at some point and force the supers to switch to Hillary.

But his handlers have scrapped the idea of any more debates and the candidate himself is dodging the press as if they all had ebola. Being thus shielded, all we will see of the candidate and read about are the issues he and his supporters wish to highlight.

Which "issues" are those? The adoring crowds. The spine tingling rhetoric. The fainting women. How charismatic he is.

You know . . . all those important issues the left was complaining weren't covered at the ABC debate last week.

-- RICK MORAN
I think too often we get caught up the day-to-day, whether it's a heated debate or a new gaffe or a bowling score of 37. Truth is, the story line in Pennsylvania was cast long before 4/22/08.

Carly Fiorina for vice president? The former Hewlett Packard CEO, an economics adviser and fund-raiser for Republican presidential candidate Sen. John McCain, has never run for public office before. But in an interview, former McCain campaign official and current Republican National Committee Deputy Chairman Frank Donatelli refused to rule her out. "I am so impressed with her," Donatelli said. "We could do a lot worse than Carly."

The Hillary Clinton campaign keeps ducking on the Weathermen issue that it tried to use against Barack Obama.

If the children who have inhabited the White House are 's princes and princesses, Senator Barack Obama already got a head start in collecting royal blessings with Caroline Kennedy's endorsement earlier this year.

But soon after Ms. Kennedy made her very public endorsement at the end of January, one of her predecessors of Republican lineage made her own private one.

Just before the crush of states that voted on Feb. 5, Ms. Eisenhower, one of two daughters of President Richard M. Nixon and his wife, Pat, made a $1,000 contribution to Mr. Obama, according to campaign finance records. Two weeks later, she gave another $1,000. And early last month, she donated another $300, reaching the contribution limit for individuals for the primary.

Obama seems either bummed or pissed or exhausted. He could be near death and still be a pretty good speaker, but he's very much off his game right now. , by contrast, is on fire--as energetic and passionate as I've seen her.

If anything, McCain has the look of an Internet stock circa 1999: Great numbers, lousy fundamentals.

Senator Barack Obama's recent comments regarding bitter Pennsylvanians clinging to guns and religion were personally offensive to me, even before I took the time to consider how spot on they really were. My first instinct was to hunt him down, but I was fresh out of ammo and late to church. This is particularly vexing for Jews who don’t own a gun.

Upon deeper reflection, however, I realized my personal holy war was actually the result of Senator Obama's flagrant omissions. Truth is, there are many other things we Pennsylvanians cling to. Some of us cling to crystal meth.

Unfortunately, there was recently a massive raid in the on a sprawling crystal meth ring, and now the stuff is harder to get around here than 87 gasoline for under 3.26 a gallon.

Compliments to American Digest for the image