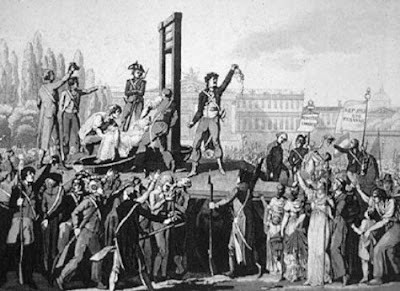 Noted academic and Hillary Clinton supporter Stanley Fish is offering himself up for decapitation or whatever fate awaits he, Barack Obama and other folks who have had relationships with Bill Ayers, the former Weather Underground member. This even though Obama was a youngster and Fish was off teaching at some high fallutin university when Ayers was running wild in the streets.

As the guilt-by-association version of smear campaigns go, the vendetta against Obama over Ayers isn't getting much traction although the campaign and right-wing floggers . . . er, bloggers like Allahpundit at Hot Air won't give it a rest.

I have a couple of theories about this.

First, most voters (especially the millions of younger ones flooding into the political arena for the first time this year) don’t give a rat's rectum if Obama had tea and then some with a man who did bad things nearly 40 years ago. And while not necessarily a paragon of repentance, Ayers has lived a rather exemplary and civic-minded life in the last couple, three decades.

Then there is the not so small matter of forgiveness. The holier among us somehow find it in our hearts to forgive family members, friends and others – sometimes even mass murderers -- for dastardly deeds. Without getting all spiritual on you, I find that having done so in a small handful of personal instances has been enormously liberating psychically for both myself and the perpetrator.

Ahem, Hillary, Allapundit and the other scolds need to reserve a space at their guillotine for moi because, as I noted when the Ayers controversy first hit prime time, I knew several members of the Weather Underground back in the day and am a longtime friend of one whom I invited into my home when he was a fugitive.

But let me add – again – while smoking my last sèche and being fitted for a blindfold that Hillary Clinton has some doggie do-do on her Pradas because of her own Weatherman connection.

While trying to eviscerate Obama over Ayers, she refuses to speak to her co-president's decision on the eve of George Bush’s 2001 inauguration to pardon Susan Rosenberg, who was convicted of participating in a 1981 Brink's armored car robbery in Rockland County, New York, that left a guard and two police officers dead, and Linda Sue Evans, who consorted with the North Vietnamese during the Vietnam War, was implicated in several bombing plots and was toting around nearly 800 pounds of explosives when the law caught up with her.

meanwhile, was linked to the 1970 townhouse bomb factory blast that killed three fellow Weathermen. For what it's worth, Ayers turned himself in to authorities in 1981 but was never arrested, while Rosenberg and Evans had to be hunted down and served some serious jail time.

I'm not suggesting that Obama or Fish or anyone else forgive Ayers for a phase of his life that they say never happened to come up in conversation, let alone had any bearing on their relationships. That would be inane. But I would appreciate being forgiven for my own past and present associations for a few more months because I'd sure hate to lose my dear crâne chauve to the falling blade before the election.