A Postcard From Small-Town Pennsylvania 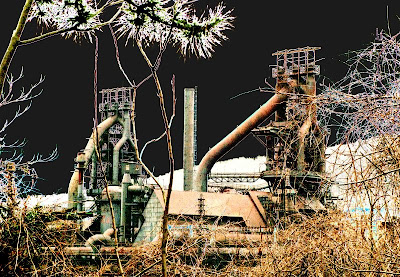 Geez! I don't blog for a day or so (except for stuff that I have in the can like my Anasazi post below) and all hell breaks loose out on the old campaign tail.

Many commentators have weighed in on Barack Obama's "bitter" remarks, and as someone who has worked in, traveled through and is blogging this week from one of the most depressed areas of small town with among the nation's highest foreclosure, bankruptcy and unemployment rates, all I can say is:

Hillary Clinton, of course, takes voters for fools who will be so superficial as to relate to the hurt in what Obama said but ignore the larger truth. I happen to think that these folks are well outnumbered by voters who understand what Obama meant and that once again his candor and 's superciliousness will work for him and against her.

Look, I have a cool job, a wonderful woman, the love of my family, excellent health care benefits, a 30-speed trail bike with a titanium frame, a rich cultural existence that includes the latest books and best in music, ballet, opera and theater, and I yelled "Free Tibet!" when the local Chinese cultural association trooped by the other day in a parade celebrating the 250th anniversary of my own small town. (One guy gave me the finger in return.) I suppose all that makes me "elitist" as Clinton accuses Obama of being -- and I too can't bowl a lick.

But even I'm bitter.

I'm among the 80-plus percent of Americans who tell pollsters that the U.S. is going to hell in a hand basket, the majority who long ago broke faith with The Decider over the Mess in Mesopotamia (didja known that another 19 of our brothers were killed last week?) and one of the Haves who look at middle-class acquaintances with deep concern who are quickly becoming Have Nots as they fall further into debt and wonder how the hell they're going to be able to keep their Uncle Leo in a managed care facility let alone send their kids to college.

want to drive us apart; as tone-deaf as the clingy aspects of Obama's remarks were, he wants to bring us together.

Not a tough choice for many people and I believe many Pennsylvanians. That is why the results of my own informal poll show that there continues to be movement away from Clinton and toward Obama with eight days to go before the primary hereabouts and that the "bitter" flap has been less a bump in the road for Obama that a defining moment of a Clinton campaign in its own bitter final throes.

White people are bitter and frustrated. Better-qualified white students, employees, etc. face intense racial discrimination. Obama and his liberal comrades call it “Affirmative Action”.
Millions of white Americans see “people who aren’t like them” illegals and inner-city parasites sucking up on free benefits.
Millions of tax paying white Americans can no longer use the public school system because “people who aren’t like them” have made the schools awash with violence, drugs, and gangster rap.

Sean...great post...you have your finger on the pulse...
Thirty percent of the media see 'bittergate' for what it is....an attempt to characterize Barack's remark as something seminally negative, when he was actually, poorly, telling a truth or the truth.
I think the reason 30% percent of the media get it is because 80/90% of the supposedly bitter folks openly and clearly understand Barack was mangledly 'on the money.'
This election now and in November will turn on one question. Obama insists on telling difficult truths and watching agonizedly while the voters thread the cacophony of spin and drivel jawed gossip from pundits, left and right.
Will the voters recognize that Obama is offering them the deep respect that they can and will recognize the difference between straight up honest assessments and the media's titter wailing? Will they also cast their votes with the intelligence Obama's campaign respectfully trusts is natural to the American citizen?

The problem was his insinuation that people have chosen their positions on guns and religion because of their economic situation. I don't believe it, but whether or not it is true, people don't think they hold their religious and philosophical positions because of poverty and bitterness, and most people think of themselves as middle-class and coping anyway, not impoverished and disenfranchised. Furthermore, it makes Obama seem hypocritical about religion. He is supposedly such a religious person and is suggesting that the religion of Pennsylvanians is a symptom rather than a choice. Something is amiss there.