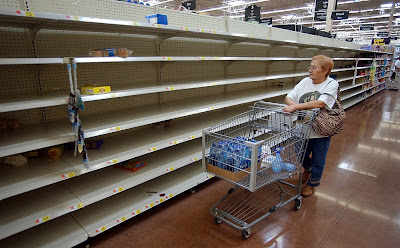 Like many guys, I don't like to shop. The Dear Friend & Conscience, on the other hand, loves to shop and just the other day we went out to drop off an old wrought-iron lawn chair at a repair shop so that it could be spot welded and came home with three new bras and an omelet pan.

Now the DF&C needed bras and I needed an omelet pan because the old one was beginning to look like a Superfund site. But my point is that what was an enjoyable hour or so for her was painful for me.

Which got me to thinking about a larger painfulness as we strolled through an enormous but nearly deserted manufacturers' outlet store complex:

Shopping has become an ordeal for the increasing number of people who don't have a couple of hundred bucks to spend at the supermarket to keep their brood in Wheaties and peanut butter as food and gasoline prices skyrocket and they still have to make mortgage payments and fulfill other financial obligations.

In yet another sign that things are bad and getting worse, no less a capitalist bastion than the Wall Street Journal suggests that it may be time for Americans, who as it is spend far less on food than in most other countries, to begin stockpiling.

You've seen the TV footage of food riots in parts of the developing world. Yes, they're a long way away from the U.S. But most foodstuffs operate in a global market. When the cost of wheat soars in Asia, it will do the same here.

Reality: Food prices are already rising here much faster than the returns you are likely to get from keeping your money in a bank or money-market fund. And there are very good reasons to believe prices on the shelves are about to start rising a lot faster."

Now I'm not an economist, nor do I play one on TV. But it is obvious that there are several reasons for food shortages (principally rice, which is now being rationed by another capitalist bastion, Sam's Club) and evidence that some Americans are indeed stockpiling.

The reasons for the shortages include dwindling food and fish stocks (duh!), inflation, climate change and the siphoning off food crops for fuel production. But the big engine is soaring oil prices, the Iraq war is the major cause for that and the Bush administration is of course the culprit.

No, this is not another exercise in Blame The Decider For Everything because this shoe fits.

One of the Forever War's greater ironies is that we were led to believe that the fall of Saddam Hussein would, among other great and noble things, result in a windfall in U.S. oil imports and a more stable Middle East.

Just the opposite has happened, of course. Iraq is still struggling to bring production back to pre-invasion levels, a substantial amount of that oil is siphoned off for the gray and black markets, and the war has caused profound instability in the region, which has helped trigger ever higher crude oil prices.

Meanwhile, Barry Ritholtz, who is an economist and plays one on TV in talking head appearances on MSNBC and elsewhere, blames food shortages on the Federal Reserve's "irresponsible bailout" of Wall Street bigs in a post at The Big Picture, for my dinero the best economics-oriented blog. (He also does some great stuff on jazz, typically on Fridays.)

Getting the heck out of Iraq is the no-brainer solution, but that's not going to happen. Taking the food crisis seriously would be a good start, but just as the Bush administration is only beginning to whisper that the U.S. economy might be in recession, it is nowhere near prepared to ask Americans to make sacrifices -- be they for war or waffles.
Posted by Shaun Mullen at 5:19 AM
Email ThisBlogThis!Share to TwitterShare to FacebookShare to Pinterest