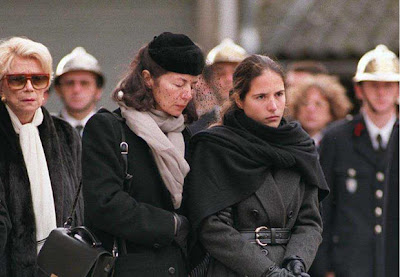 What does George Bush have in common with prostitutes? For the answer see the end of the next paragraph.

. . . [P]hotographs of French president François Mitterand's funeral showed his widow, mistress and their daughter, all gazing sadly at the casket. Had Eliot Spitzer died while consorting with prostitutes there would have been no photographs of the prostitutes standing sadly by the coffin with Mr. Spitzer’s wife and daughters. That's because prostitutes don’t do funerals. Here is the answer to the riddle. Neither does George Bush.

George Bush doesn't even like to be in the presence of coffins even though it is thanks to him that the sad remains of more than 4000 service personnel have found resting places in coffins.

[] can reel out the policy when that's what's required. But cruel political fighting unleashes her super powers.

One of the great dangers of the Bush administration is that it will permanently alter our sense of what is possible or acceptable. You can see an analog of this when people say things like: Bush won't be able to do X, or: he will have to do Y, where these statements do not refer to physical necessity or impossibility. (E.g., if memory serves, when the surge began, some Republicans said: if it doesn't work, Bush will have to withdraw.) The sense in which people who say such things think that Bush "has to" or "can't" do something or other is just that there are certain things we do not believe that any President would do, and others we think he must do. There are lines we assume he would never cross.

But this administration does not recognize the existence of any such lines.

Do you think if Barack Obama had left his seriously ill wife after having had multiple affairs, had been a member of the "Keating Five," had had a relationship with a much younger lobbyist that his staff felt the need to try and block, had intervened on behalf of the client of said young lobbyist with a federal agency, had denounced then embraced Jerry Falwell, had denounced then embraced the Bush tax cuts, had confused Shiite with Sunni, had confused Al Qaeda in Iraq with the Mahdi Army, had actively sought the endorsement and appeared on stage with a man who denounced the Catholic Church as a whore, and stated that he knew next to nothing about economics -- do you think it's possible that Obama would have been treated differently by the media than John McCain has been? Possible?

I understand why it’s political poison to show disrespect for small-town values — dignity is precious to all of us, and often trumps material interest. But why is it OK to disrespect big city values, even to suggest — as Bush has — that big-city dwellers aren’t part of the "real ?

Pope Benedict XVI, who is turning out to be a far cry from the draconian enforcer of orthodoxy that some had feared, drew an important distinction the other day when he was taking questions from reporters on his flight to the U.S. Asked about the sexual abuse crisis that erupted within the Catholic Church in 2002 and still simmers today, the pope said, "I would not speak in this moment about homosexuality, but pedophilia, [which] is another thing."

For most sensible adults, separating being gay from being a child abuser makes perfect sense. But it had to disappoint certain Catholic conservatives who have been trying these past six years to manipulate the sexual abuse crisis into an opportunity to attack gays.

Looks like someone on John McCain's staff decided to rip off some Food Network recipes and assert on the campaign website that they were Cindy McCain's family favorites. This is a bit of an odd thing to have happen. Most people, I take it, do in fact have some favorite recipes. Surely Mrs. McCain would have been willing to divulge hers. And if she doesn't have any favorite recipes, it's not as if failing to include a "Cindy's recipes" section on the website was likely to prove a devastating liability in the election.

I don't know if Chris Matthews is seriously considering seeking the senate seat of Sen. Arlen Specter, R-Penn., in 2010. But just in case he is, let me state this clearly.

Should Matthews seek the Democratic nomination, I will support his opponent monetarily. I will urge Pennsylvanian progressives to do everything possible to defeat him. I will consider moving to for the duration of the 2010 primary season to work for his opponent.

If Matthews somehow gets the Democratic nomination, I will donate money to Arlen Specter, or, in the event Specter steps down, I will donate money to whomever the Republicans endorse for the seat, up to and including Rick Santorum. And I will again urge Pennsylvanian progressives to do everything they can to defeat Matthews, no matter the consequences. If it costs the Democrats control of the Senate, if it sends Pat Toomey to , if it cements Republican control of Congress for a generation, I will do absolutely everything within my power to keep Chris Matthews from being elected to the United States Senate. Because if Matthews -- a childish, misogynistic, embarrassing boor of a human being -- can be elected to the Senate as a Democrat, then the label "Democrat" has no meaning worth defending.