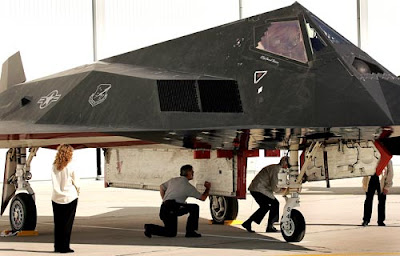 They were born shrouded in mystery in a windowless building in Burbank. They flew combat missions over Serbia and Iraq virtually invisible to enemy radar. And today, the black, bat-like F-117A Night Hawks will fly quietly into the night as stealthily as they came.

The last four of the world's first stealth fighters will make their final flights from Palmdale to a secret desert base in Nevada, where they will be locked up indefinitely in a secure concrete hangar.

. . . The single-seat F-117 was the first plane that could evade radar detection; it was designed to fly into heavily defended areas to knock out radar installations and anti-aircraft missile batteries, clearing the way for other fighters and bombers. It was also used to destroy military command and communication centers.

-- KATHRYN JEAN LOPEZ
Saint Pet gets his reward for giving the Bush administration an opportunity to say the quagmire isn't a quagmire, and his No. 2 gets the job of keeping the lid on long enough to pass it along to the next administration.

I've no doubt whatsoever that Petraeus will be confirmed in his new post. The politics of trying to oppose such a PR juggernaut are impossible and there's little doubt he's an efficient soldier. He was told to give a plausibly positive cast to the military aspect of the Iraqi misadventure and he's done that. But being in charge of centCom requires far more than just being a good and obedient soldier - it requires skills and an independent mindset that aren't proven by Petraeus' previous record.

-- CERNIG
A project heralded as the dawning of an innovative, low-cost era in Navy shipbuilding has turned into a case study of how not to build a combat ship. The bill for the ship, being built by Lockheed Martin, has soared to $531 million, more than double the original, and by some calculations could be $100 million more. With an alternate General Dynamics prototype similarly struggling at an Alabama shipyard, the Navy last year temporarily suspended the entire program.

The tests were conducted at an Army laboratory in Maryland last fall. Ten M4s and 10 copies each of three other carbines _ the SCAR from Belgium's FN Herstal, and the HK416 and the XM8 from Germany's Heckler & Koch _ were coated in heavy layers of talcum-fine dust to simulate a sandstorm. Tens of thousands of rounds were fired through the rifles.

The M4s malfunctioned 882 times. Bullets that didn't feed through the rifles properly or became lodged in the firing chamber were the biggest problems.

The other carbines had far fewer hitches. The carbine with highest marks was the XM8, a gun with a Star Wars look that the Army considered buying just a few years ago but didn't. The program collapsed due to bureaucratic infighting and questionable acquisition methods.

Despite the testing troubles, the Army and Colt are defending the M4, the rifle U.S. forces rely on in combat. The tests, they stressed, were only meant for research purposes and didn't represent actual conditions.

What's so amazing -- and truly frightening -- about the Bilal Hussein story is that the government may have actually turned to warbloggers for information. At least one source even allegedly credited the laughable Jawa Report blog for helping put Bilal Hussein behind bars for two years while the military in pondered his fate. That warbloggers are right less often than a stopped clock is one thing. That CENTCOM officials have apparently deputized the clueless Inspector Clouseaus in the War on Terror represents a national embarrassment.

A one-day visit to an aircraft carrier is a lifelong lesson in conservatism. The ship is immense, going seven decks down from the flight deck and ten levels up in the tower. But it's full, with some 5,500 people aboard. Living space is as cramped as steerage on the way to . Even the pilots live in three-bunk cabins as small and windowless as hall closets. A warship is a sort of giant tank upon the water. Once below deck you're sealed inside. There are no cheery portholes to wave from.

[John] McCain could hardly escape understanding the limits of something huge but hermetic, like a government is, and packed with a madding crowd. It requires organization, needs hierarchies, demands meritocracy, insists upon delegation of authority. An intricate, time-tested system replete with checks and balances is not a plaything to be moved around in a doll house of ideology. It is not a toy bunny serving imaginary sweets at a make-believe political tea party. The captain commands, but his whims do not. He answers to the nation.

Photograph by Al Seib/The Los Angeles Times
Posted by Shaun Mullen at 5:00 AM
Email ThisBlogThis!Share to TwitterShare to FacebookShare to Pinterest