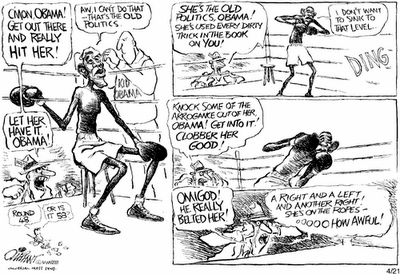 One explanation for the Clintons' suicidal behavior (apart from the fact that we have two sociopaths on our hands) is that they believe that the real struggle for the White House is now. They believe that the GOP is doomed this fall and so the prize really is worth risking the implosion of the Democratic party, and alienating an entire generation and most African-Americans for the foreseeable future.

So, a question for Lanny. If Barack is such a bad candidate, and he is so unelectable, and it is such a bad idea to have him as the Democratic nominee, why can't Hillary beat him?

Why to those questions and a hundred more like them. If your candidate is so much better, why is Obama kicking her ass? Why?

As an old Virginia man, I’m supposed to speak of Thomas Jefferson as though he were in the next room. So let me say that Mr. Jefferson is as pleased by the prospect that Hillary Clinton will not inherit the office of President as he was displeased when George W. Bush did so

In head-to-head matchups against presumptive Republican nominee McCain, Clinton and Obama perform almost exactly the same. In 's latest tracking of the general election, based on interviewing conducted April 18-22, McCain has a one-point lead over both Clinton and Obama. In the April 18-20 USA Today/Gallup poll, both Clinton and Obama were slightly -- but almost identically -- ahead of McCain among likely voters. In neither instance is there any meaningful difference in how the two candidates stack up against McCain.

Mr. Obama is not blameless when it comes to the negative and vapid nature of this campaign. He is increasingly rising to Mrs. Clinton’s bait, undercutting his own claims that he is offering a higher more inclusive form of politics. When she criticized his comments about "bitter" voters, Mr. Obama mocked her as an Annie Oakley wannabe. All that does is remind Americans who are on the fence about his relative youth and inexperience.

We've written before about the fact that John McCain has more or less abdicated all of his responsibilities in the Senate while running for president. The man almost never votes anymore: he once went five consecutive weeks without voting. Now we learn that he's the Senate's top absentee, passing Democratic Senator Tim Johnson of , who suffered a brain hemorrhage in December 2006 and was unable to return to the Senate until last fall, in terms of votes missed. I guess it takes time to suggest doing nothing about 's economic crisis.

Cartoon by Pat Oliphant/Universal Press Syndicate
Posted by Shaun Mullen at 5:00 AM
Email ThisBlogThis!Share to TwitterShare to FacebookShare to Pinterest