The 71-Year-Old Candidate & His 100-Year War: Is McCain Totally Right In the Head? 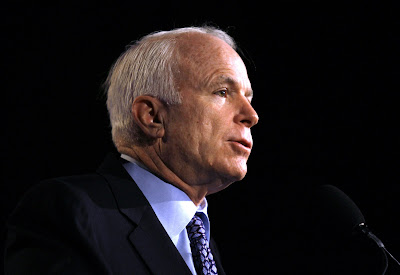 Anyone who takes a politician's statements literally over and over again is either a hopeless optimist or a fool. Or likely both in the case of John McCain supporters upset over the cottage industry in misquoting his statement about being just fine with American involvement in Iraq for 100 years.

Back on January 3 at a town hall meeting in New Hampshire, McCain said that he could see a 100-year American presence in like the s presence in and "where Americans are not being injured or harmed or killed."

But to keep focusing on the contextual sleight of hand employed by Hillary Clinton, Barack Obama and a small army of pundits, Yours Truly included, in not taking McCain's comment literally is to miss the larger and more important point: Dragging Japan and South Korea, let alone any other historic antecedent involving an American presence in a foreign country, into the Iraq quagmire is like a stripper wearing pasties to conform with a no-total-nudity law.

It is amazing that there are even any pro-war literalists left. Or maybe they're just doing some really fine pharmaceuticals since what they have been told about the war by the White House has been one lie after another:

Americans were not greeted as liberators.

There were no WMD.

The troops were not home by Christmas 2003.

They were not properly trained or equipped to fight an insurgency.

There was a catastrophic civil war.

And the Surge has not been a success.

The truth is that the Surge has succeeded in lowering American and Iraq death tolls to 2005 levels through a combination of military smartwork and bribery while giving the Iraqi government ample opportunity to prove that it has no interest in trying to mend deep sectarian rifts as long as it is guaranteed a long-term American troop presence – in McCain's case a presence rounded up to 100 years.

His father, John S. McCain Jr., was a beloved four-star Navy admiral and my commanding officer during the Vietnam War. His son's exploits in combat, his capture, his heroic refusal to buckle under torture and his homecoming after six years in the Hanoi Hilton are deservedly the stuff of legend. And despite some differences on the issues that I care about, I was able to rationalize voting for him a year ago in what seemed then to be the unlikely event that he would be the Republican nominee and the Democrats ran another weakling against him.

That is until I started taking a close look at what McCain has been saying about the war since its outset.

His serial gaffes over Sunnis, Shiites and the ambidextrous role of in the conflict are troubling in and of themselves, but they are small beer compared to his record of being incapable of learning -- as in learning from experience and history -- when it comes to Iraq.

He originally predicted the war would be "brief" and has unembarrassedly and repeatedly retrenched and declared success despite setback after setback, most recently following the abortive siege of Basra, the nature and consequences of which he seemed truly befuddled over, the result being that he has fundamentally misrepresented what happened.

McCain just can't seem to do any better in his supposed area of expertise, and I'm beginning to believe that the guy isn't right. As in not totally right the head.

* * * * *
The neurophysiology of the aging brain is not fully understood, and I am trying to tread carefully when it comes to McCain's 71-year-old noggin, which was subjected to terrible abuse while in captivity, brain-eating chemotherapy when he was being treated for melanoma, perhaps a few too many vodka martinis, and who knows what else.

In McCain's case, it's not necessarily an in-your-face thing, but he keeps causing me to wonder.

I wonder why he insists on surrounding himself with people like the insidious Phil Gramm, his campaign co-chair and chief economic advisor, and the toxic Charles Black, yet another card-carrying member of the cult of lobbyists that he claims to have disassociated himself from. Black, McCain's chief campaign strategist, was not just one of the architects of the greatest foreign policy blunder in American history, but has been a champion of yet another poisonous figure, Ahmad Chalabi, that Machiavellian geyser of ulterior motives and bad information.

I wish it was as simple as McCain getting bad advice from bad people, but it runs much deeper, which is one reason why he must stop stonewalling on the release of his medical records.

McCain would be the oldest person to assume the presidency, which makes his age a legitimate issue. But I know a couple of septuagenarians who are as sharp as tacks and run mental circles around people half their age. For me it's less the fact that McCain would be 72 upon taking the oath of office than the state of mind of this particular 72-year-old.

When the red phone rings in the White House at 3 a.m., the president must have a fully functioning brain as well as the ability to be flexible; again, to have the capacity to learn.

John McCain would seem to fail on both counts.

They did not take the statement literally, they misrepresented it, deprived it of its proper context and substituted their own.

If Iraq became peaceful today -- if Iraq requested us to remain -- would you have any problem with keeping a substantial force in Iraq for strategic purposes? Have our forces in West Germany and Japan been of any value in your opinion?