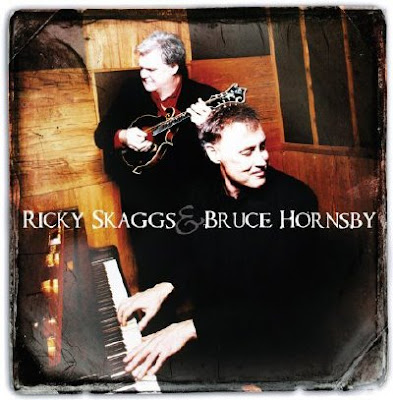 traditionalists are still in shock over a 2007 album collaboration between bluegrass legend Ricky Skaggs and free-wheeling pianist Bruce Hornsby.

Pianos typically are not welcome additions to the acoustic guitars, mandolins, banjos, fiddles and upright basses of bluegrass bands, and I was inclined to agree until the Dear Friend & Conscience and I heard Hornsby and Skaggs front of Skaggs' marvelous six-piece Kentucky Thunder backup band last night at the F.M. Kirby Center in Wilkes Barre, Pennsylvania.

It took perhaps a third of the two hour-plus concert before we could even hear Hornsby except on solos. Even after the sound was adjusted, his terrific keyboard stylings tended to get lost in the cacophony of strings, including Skaggs' brilliant mandolin playing and gorgeous fiddling by Stuart Duncan and nonpareil banjo picking by Jim Mills.

And perhaps it is a reflection of my own tastes, but it seemed like Skaggs and Company brought more to Hornsby's extended rock- , blues- and jazz-influenced songs such as "White-Wheeled Limousine" and "Mandolin Rain" than Hornsby did to Skaggs standards such as "Stubb" and "The Dreaded Spoon," although their set-closing cover of Rick James' "Super Freak" was terrific.

Would I see this ensemble again? Absolutely, but it would be nice if the sound was right from the outset.

Posted by Shaun Mullen at 4:11 PM
Email ThisBlogThis!Share to TwitterShare to FacebookShare to Pinterest

There are some wonderful "Sherlock world" writers who have extended the Doyle franchise. The best is Laurie King with The Beekeeper's Apprentice.