Quotes From Around Yon Debate-osphere 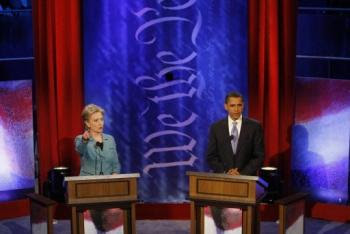 In perhaps the most embarrassing performance by the media in a major presidential debate in years, ABC News hosts Charles Gibson and George Stephanopolous focused mainly on trivial issues as Hillary Clinton and Barack Obama faced off in . They, and their network, should hang their collective heads in shame.

Wars in Iraq and Afghanistan, the health care and mortgage crises, the overall state of the economy and dozens of other pressing issues had to wait for their few moments in the sun as Obama was pressed to explain his recent "bitter" gaffe and relationship with Rev. Wright (seemingly a dead issue) and not wearing a flag pin -- while Clinton had to answer again for her Bosnia trip exaggerations.

Then it was back to Obama to defend his slim association with a former '60s radical -- a question that came out of rightwing talk radio and Sean Hannity on TV, but was delivered by former Bill Clinton aide Stephanopolous. This approach led to a claim that 's husband pardoned two other '60s radicals. And so on. The travesty continued.

More time was spent on all of this than segments on getting out of and keeping people from losing their homes and -- you name it. Gibson only got excited complaining that someone might raise his capital gains tax. Yet neither candidate had the courage to ask the moderators to turn to those far more important issues. Talking heads on other networks followed up by not pressing that point either. The crowd booed Gibson near the end. Why didn't every other responsible journalist on TV?

It was a lifeless, exhausted, drained and dreary Obama we saw tonight. I’ve seen it before when he is tired, but this was his worst performance yet on national television. He seemed crushed and unable to react. This is big-time politics and he’s up against the Clinton wood-chipper. But there is no disguising the fact that he wilted, painfully.

Well, what we saw tonight was Hillary Clinton making a strong, last-ditch effort to pull her flagging campaign back from brink, get it back on track to victory on April 22 and make the superdelegates realize that she really is their last best chance to retake the White House.

She drummed on Obama not just for his remarks about small towns, guns and religion, but for his vast dearth of experience compared to hers–and that includes her experience of being ravaged by Republicans and living to see another day.

Obama, for his part, strove to defuse the negative ripples his aforementioned-ad-nauseum remarks might have engendered, not to mention the controversial comments of his former pastor–all of which appear not to have tarnished him much in polls.

Most importantly, he tried to get voters to imagine him as commander-in-chief, assigning "a mission" to his commanders–he's the decider–although consulting with them re: tactics.

. . . And, for Hillary Clinton to get so giddy about the Wright question was really just sad. She was the official purveyor of fringe talking points. Shockingly so. And, she seemed to enjoy it. There’s a reason people think Clinton is dishonest as we saw today in the findings of the Washington Post-ABC News poll. She's not only in this to win, she’s in it to win dirty — and to destroy Obama. She invoked Louis Farrakhan tonight for no reason — just to say it. Give me a break.

Charlie Gibson and George Stephanopoulos took a giant crap on democracy tonight and then had the gall to ask Barack Obama why he doesn't wear a flag-pin on his lapel, as if this were an issue of interest to Democratic primary voters in Pennsylvania.

The last Democratic debate has finally concluded, and perhaps the last chances of ending the primaries early. Thanks to a surprisingly tenacious set of questions for Barack Obama and Hillary Clinton from ABC moderaters Charles Gibson and George Stephanopolous, Barack Obama got exposed over and over again as an empty suit, while Hillary cleaned his clock. However, the big winner didn't even take the stage tonight.

. . . The winner of this debate? John McCain. Both Democrats came out of this diminished, but Obama got destroyed in this exchange. If superdelegates had begun to reconsider their support of Obama after Crackerquiddick, they’re speed-dialing Hillary after watching Gibson dismember Obama on national TV tonight. And kudos to ABC News for taking on both candidates fearlessly. John McCain has to feel grateful not to be included.

[T]onight's debate rises to the level of political crimes against humanity, and fullthroated objection must be registered. Tell ABC that wasting 40 minutes of several million people's time on completely irrelevant figures like Ayers and near-irrelevant figures like Wright is unconscionable when a deeper discussion of things like education and health care is really merited.

Keeping the score card, there’s no way Obama could fared worse. Nearly 45 minutes of relentless political scrutiny from the ABC anchors and from Hillary Clinton, followed by an issues-and-answers session in which his anger carried over and sort of neutered him. But Hillary Clinton has a Reverse-Teflon problem: her negatives are up, and when she’s perceived as the attacker, the attacks never seem to settle on Obama and always seem to boomerang back on her. So it would be unwise to declare that Hillary "won" the debate in the dynamic sense just yet. (How much money will Obama raise off this debate? $3m million? $4 million?)

I had chicken for dinner. It was really good. I really need to catch up on some laundry tonight. I'm kind of sad that Pricilla Presley was voted off of Dancing With The Stars last night. My daughter decided on a college today. I love ice cream.

I wonder if ABC will schedule a debate for me to discuss these things on national television.