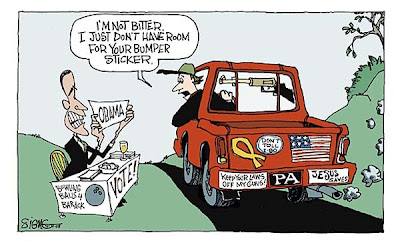 After a weekend spent making direct appeals to gun owners and church goers, Hillary Clinton said Sunday a query about the last time she fired a gun or attended church services "is not a relevant question in this debate" over Barack Obama's recent comments on small town Americans.

"We can answer that some other time," said at a press conference held in a working class neighborhood . . . "This is about what people feel is being said about them. I went to church on Easter. I mean, so?"

Those ubiquitous commercials for Cialis, Levitra, etc. may be telling us more about our national psyche than just the state of the male libido.

Put together with surveys showing sagging confidence in the institutions of power, they present a picture of American impotence--to either win or get out of a hopeless war, to rebuild after a natural disaster or deal with hard times. (Is Congress' stimulus bill any more than a weak dose of economic Viagra?)

Years of a smirking, swaggering George W. Bush who has failed to perform where it counts have taken a toll on American life. To compensate, he has surrounded himself with Cheney's Neo-Cons, whose judgement has been clouded by seven-year erections for which they have failed to find satisfaction or seek medical attention.

Now the political party that gave us all this is offering an aging macho figure who promises to follow Osama bin Laden to the gates of Hell but can't seem to find his way around the factions in .

In offering a non-belligerent younger man and/or a woman, Democrats may be onto something--empowering Americans with the sense that real strength comes, not from blustering and bullying, but using empathy and understanding to form real connections in the world.

We don't need pills for that.

Everything that’s wrong with the GOP in two words: Trent Lott. "I haven’t paid for lunch in 30 years."

The unemployment rate is low. The jobless rate is high.

Those two seemingly contradictory statements are especially true for American men in what should be the prime of their working lives. Those facts may help to explain the stark pessimism of Americans about the economy, and shed some light on the rise of illegal immigration as a political issue.

Does understand how easy it will be for a single athlete to unfurl a banner on the medal stand and create as iconic an image of these Games as the black-power salute of Tommie Smith and John Carlos was for in 1968? The ability of a few publicity-minded souls to embarrass and even defeat a world power is a core discovery of the age of global media, but it's not exactly new. It's been the secret to Al Qaeda's endurance, and to the success of insurgents in . Americans have learned it the hard way. The fact that neither the Chinese Communist Party nor the I.O.C. seems to understand what they’ve gotten themselves into shows how isolated and self-regarding these two institutions are.

According to the FBI, in 2006 there were 17,000 murders and non-negligent manslaughters in the . According to the , "Lack of health insurance causes roughly 18,000 unnecessary deaths every year."

Apology of the month comes from Loaded, the little boys’ magazine, which somehow persuaded itself that Heinz once supplied the Nazi regime with a version of alphabet spaghetti consisting of tiny swastikas. This is an urban myth. "We now accept that Heinz has never produced swastika shaped spaghetti nor did it support the Nazi regime in any other way. Indeed, we accept that Heinz was a major contributor to the Allies’ war efforts, producing rations for the troops," the magazine admits dolefully. Ein Reich! Ein Volk! Ein Spaghetti!